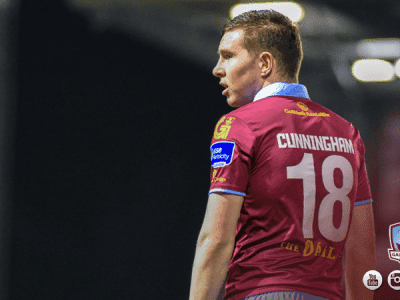 The Headford forward was approached by City manager John Caulfield and did visit their training facilities but has decided to focus on Gaelic Football and helping Kevin Walsh’s team stay in Division One of the National Football League.

Cunningham featured in the Connacht FBD League scoring two points in their 1-10 to 1-9 victory over Mayo last Friday (January 12th) and his current ambition is to become a regular in Galway’s starting 15.

“When I grew up it was all Gaelic football in my house,” said Cunningham to RTE Sport’s Johnny Ward.  “It was only when I moved to Mervue United that soccer took over.

“I played Gaelic all the way up to Headford minors and they asked me back for the county final at under-21 level, when we beat local rivals Caherlistrane by two points. I came on at half-time that day.”

He missed out as they lost out to Glenamaddy/Glinsk in the county final proper after picking up an injury against Mayo but he was happy to get the call-up to the maroon and white.

“I was playing with Headford this winter really with the intention of staying fit,” added the former county minor.

“Then speculation arose and there were talks with the Galway county board – they sat me down and told this is a big year, that they really want to push on and make a Division 1 challenge, to be there or thereabouts.

Cunningham spent three years with Galway United after his move from Mervue and Shane Keegan tried to keep him.  He scored four goals in the 2017 Airtricity League and admitted it was a tough call.

“I did a lot of thinking over it, even with the whole family,” concluded Cunningham.  “I decided that Gaelic football was the right route to go down, even though I loved my time at Galway United.

“Now I want to push on and make the team.  I’m hoping I can keep pushing myself to achieve that.”