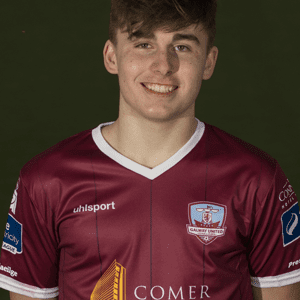 Ronan Manning has become the latest Galway United player to sign for 2018 after he put pen to paper on a contract extension.

The 17-year-old is a younger brother of Queens Park Rangers’ Ryan Manning who left the Tribesmen in 2015 for cross channel action.

The younger Manning signed for Galway United last season and made 17 appearances for Nigel Keady’s under 19s scoring five goals.

And manager Shane Keegan was impressed giving him five appearances with the senior team including his debut in August against Killester United in the FAI Cup.

Ronan Manning previously played with Mervue United for two seasons before joining Galway United in March 2017 and has represented Ireland at under 15, under 16, under 17 and schools level and will be hoping to make a major breakthrough at club level in 2018.

The highly rated 17-year-old was introduced to first team football last season, making a total of five appearances for the club.https://t.co/nLGOGWzWYq #GUFC pic.twitter.com/ETs6NwB8n9

“We waited for Ronan to finish his school year before properly bringing him into the group last year,” said Keegan to Galway United’s official website when asked about Manning’s introduction to senior football.  “To be honest, I think he blew the socks off everyone.

“He just seems to be a player who becomes even better when he’s surrounded by better players. The higher the standard of player around him, the better he looks. The players and staff were just so impressed by him.

“He’s a player who could potentially have a very big impact next season and if he can do as well as I believe he can, then it really is going to be all about keeping his feet on the ground, keeping him focused and working hard.”

Planning permission is being sought for an overhaul of the Oranmore Community Centre that will include a new all weather spectator stand and external...
Read more
SOCCER

Galway United has confirmed that Stephen Walsh is returning to Eamonn Deacy Park in the club's latest signing announcement.The 30-year old has made over...
Read more
SPORT

NUI Galway has announced a new partnership with Rowing Ireland which will help develop the high-performance programme at NUI Galway.The college will become an...
Read more
Facebook
Twitter
Pinterest
WhatsApp