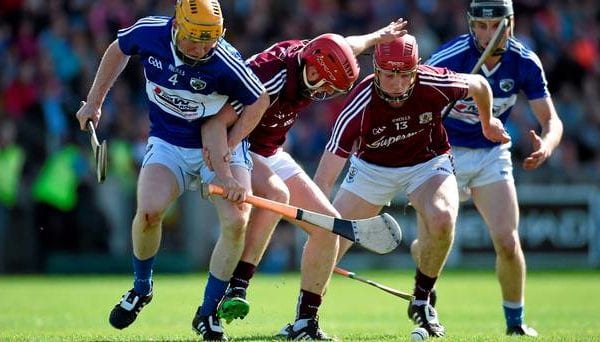 Just like their victory over Antrim, Galway outscored their opponents seven points to one in Portlaoise to book a second successive victory in the National Hurling League Division 1B.

Two first half Conor Whelan goals gave the Tribesmen a fortunate first half lead (2-6 to 0-10) but even with the wind, they allowed Laois back on level terms before pulling clear.

Ross King put in a tremendous performance for the hosts as he scored a dozen points and four after the restart brought them all square for the sixth time at 2-8 to 0-14.

Galway did rattle the Laois crossbar before King reduced arrears to the minimum on 51 minutes.  Johnny Coen scored for the maroon and white but King again replied.  But that was as close as Laois got.

Two Joseph Cooney points and Aidan Harte provided a cushion before Mark Kavanagh left it 2-14 to 0-17 with seven minutes remaining.

Laois needed a goal but Galway rallied for the result.  Mannion added two more, Joseph Cooney and Harte also tallied and the Tribesmen had pulled off a second win even if their performances are still way off their expected levels.

Whelan got his first goal following Davy Glennon’s assist on two minutes but Laois hit four on the trot through Eric Killeen and King to take the lead.

Harte, Glennon and Padraig Brehony gave Galway a 1-3 to 0-4 advantage but showing no fear to the All-Ireland champions, King, Willie Dunphy and Enda Rowland had Laois 0-10 to 1-4 ahead in first half injury time.

The game’s turning point was Galway’s second goal before half-time as Brehony and Glennon combined to allow Whelan a second green flag.  Mannion and Joseph Cooney gave them their interval lead.

It was a blow for Laois who deserved to be ahead but they made a good fight of it throughout even if both teams finished with 14 men after first half sendings-off for Galway’s Greg Lally and Laois’ James Ryan.

Galway are in the very early stages of their 2018 preparations and too much shouldn’t be made of their opening displays.  They’ve pulled off two results when needed which is a hallmark of champions and are effectively through to the quarter-finals before the visit of Offaly to Pearse Stadium on February 18th.

Rory Delaney wrote in the Leinster Express – “Laois lost out to Galway in a brilliant battle at O’Moore Park tonight, as Eamonn Kelly’s charges pushed the Tribesman all the way.”

Declan Rooney wrote in the Irish Examiner – “Galway inflicted a second Division 1B defeat in a week on Laois as Conor Whelan’s brace continued Galway’s winning start to the season.”

Steven Miller said on rte.ie – “Two first-half goals from Conor Whelan proved crucial as All Ireland champions Galway did just enough to see off the brave challenge of Laois in O’Moore Park.”