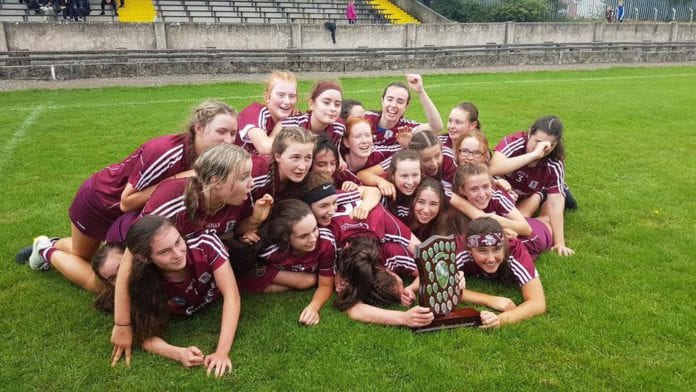 We had our say last week on the county senior and intermediate camogie set-ups and there was plenty of reaction and debate that will keep us fired up over the winter months before the shape of both teams for 2019 is known.

There’s no doubt we could write more columns, field more questions and get a major discussion in operation (and that might happen yet).  But we encouraged the players to park it last week and we will practice what we preach.  On a good day for Galway camogie, it’s only right to savour it.

While management and board members acknowledged that work needs to be done to convert these multi All-Ireland underage winners into adult champions, isn’t it great to have such a supply line coming through?  And where would you rather have been then last Sunday in Nenagh?

Galway won two All-Ireland under 16 camogie titles!  And they beat Cork twice!  That’s sweet enough to celebrate the day anyway but with the ‘A’ side securing a fourth consecutive title, those in McDonagh Park were part of history.

There was worries at the start when Cork came bulldozing out of the starting blocks, ash hammers in hand supported by a strong gust.  The Munster team were quickly 1-2 to 0-1 clear and memories of Cork’s minor success in April impossible to avoid.

But starting with Lorraine Larkin’s charges in 2015 and before, along with Tony O’Donovan’s double winners in 2016 and 2017, there was no panic.  These young players don’t carry the fear or nerves of their predecessors.  They just gradually fixed the problem.

No doubt manager Gerry Dolan’s instructions were involved but it felt like the players realised what needed to be done.  Half backs Cora Kenny, Katie Manning and Aoife Brennan tightened as a unit supported by dropping midfielder Alannah Kelly.

Suddenly the open highway afforded to Cork’s attack, particularly goal scorer Cliona O’Leary, was shut down.  And the Tribesgirls went back to doing what they do best – hitting scores and knocking teams.

Captain Aine Keane’s goal on 15 minutes was one to cherish.  Winning a loose sideline ball, the St. Thomas centre forward set off.  Cork stood back, Keane wasn’t impressed and lashed a venomous strike that keeper Caoimhe Buckley would have found difficult to see, let alone stop.

Gates open and no time to stand on their laurels.  Another attack, this time down the left flank and Niamh McPeake was on her way.  A second goal scored and Galway were 2-4 to 1-4 up at half-time.

Cork had started brilliantly but needed that again against the elements.  Galway’s generosity ended with Keane’s goal and when McPeake got the third on 33 minutes, there was no going back.  They finished with six unanswered points and a collection of quality displays including Kenny, Keane and McPeake.

And that was the second half of a double.  Regardless how good the ‘A’ team was, the ability of the ‘B’ team could be the catalyst to future senior success.  Not many know but Henry Shefflin was struggling to make county panels at this stage.

But Galway’s reserves made a strong case for inclusion at a higher level in the future.  Sabina Rabbitte, daughter of the great Joe, got four goals with Laura Kelly, Sinead King and Fodhla Ni Bhraonain also finding the net.

And no mention of that fantastic 7-6 to 2-10 win could go without acknowledging the efforts of Davitts’ Chloe Farragher.  She only got one point but set up multiple scores including the first three goals and also won a lot of breaking ball.

We had a steward in the press box that couldn’t believe these players couldn’t make the other team.  But some will as the pool of active inter county players naturally dwindles in the next few years.  There’s unlikely to be a minor reserve competition and other sports will call some of these stars.

However, thankfully 2018 didn’t end without an All-Ireland title for Galway.  Underage success isn’t measured by wins but players coming through (Lorraine Larkin’s 2013 runners-up were as good as any of the six All-Ireland winners since 2009).  But it does give the county a lift heading into winter.

The next step for these players is under 17 development and the minor All-Ireland race.  They should enjoy this stage but for many, they have a long way to go.  They’ll savour this and hopefully bigger days ahead.