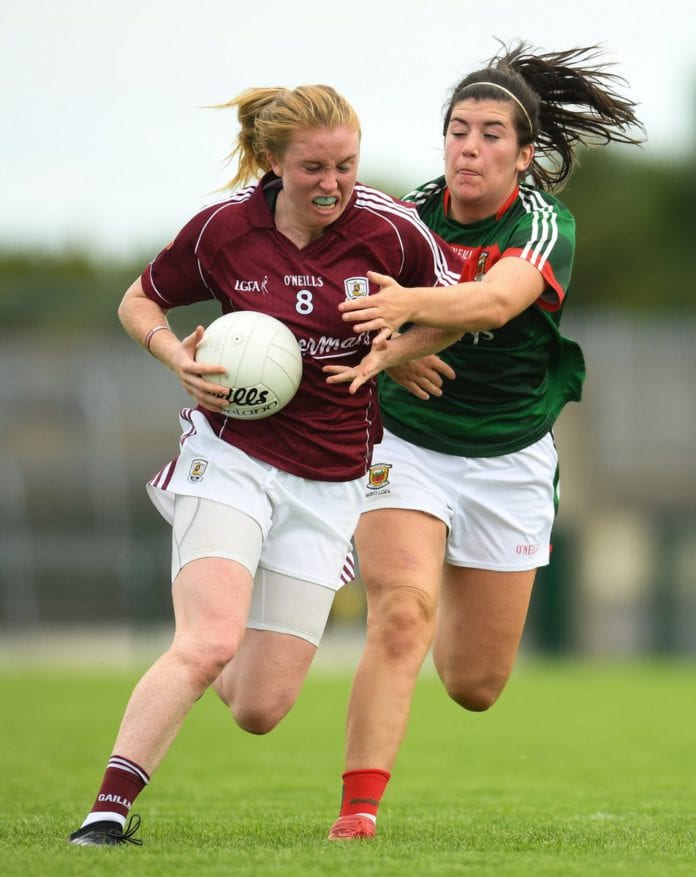 When it was done and dusted, players embraced, got focused on the warm down and a sense of achievement could be felt around Dr. Hyde Park.

Dr. Hyde Park, Roscommon had just witnessed another mature performance from the girls in maroon as they qualified for a first All-Ireland semi-final since 2014.  But as they took their place at the penultimate hurdle in the race for the Brendan Martin Cup, they did so with a validation that they belonged there.

Galway 2018 has been a different animal to twelve months earlier when they took a 24-point trimming from Cork at All-Ireland quarter-final stage following a 15-point league hammering to Donegal.  They scrap for everything and are equally willing to dish out punishment.

Since their Connacht success in June, they’ve been favourites three times, won three matches they were expected to prevail.  But they did so in a manner befitting a squad that’s looking ready to come of age.

Galway through to a first All-Ireland semi-final since 2014 @ConnachtLGFA#properfan pic.twitter.com/pk8mAPG3e7

Make no mistake, their year could be over in two weeks.  Galway meet defending champions Dublin in the All-Ireland semi-final and will be up against it.  The country expects a Dublin-Cork decider.  But along with Donegal, Galway have shown their worthy contenders to spoil the party.

After all the events that took place in Mayo over the last month – the 12 defections, Carnacon, Cora and the rest – there was always fears that the neighbours siege mentality could turn the tide on its head.

But Galway don’t buy drama anymore.  They are a sporting group now looking for stories in results and creating a passage for underage All-Ireland winners to advance in years to come.  After years of infighting and watching from afar, the Tribeswomen look ready to create their own destiny.

Whether that comes in 2018, 2019 or further beyond, Sunday suggested the dawn of a new era.  Even if the CBE Cup wasn’t at stake in this tie, Galway firmly planted their flag as Queens of Connacht and left Mayo facing a very uncertain future.

The opening quarter showed the nerves of an occasion like this.  The target all year was semi-final and it took them a while to get going.

But like their previous three championship games, Galway’s work rate was unrelenting and eventually the rewards came.  Leanne Coen was a surprise when named Claregalway Hotel Senior Club Player of the Year in 2017.  She’ll finish 2018 as a bone fide senior inter county star.

Caitriona Cormican has enjoyed a rebirth, whether big ball or small, and played a major role in the move that led to the opening goal.  Nicola Ward and Tracey Leonard assisted the interchange of passes that allowed the St. Gabriel’s player move from midfield to attack before shooting past Laura Brennan.

After just 19 minutes, Galway were 1-4 to 0-2 ahead and their alertness earned more rewards.  Their kick outs have been subject to intense scrutiny over the last three years.  Now the Tribeswomen are punishing wastefulness.

Brennan delivered three excellent second half Mayo saves but she’ll be disappointed with some of her first half restarts.  Giving Louise Ward a free pass to cause chaos is a recipe for trouble and Ailbhe Davoren was a willing assistant in getting another goal.

Davoren and Aine McDonagh are two young Moycullen talents lighting up club and county but both have suffered recent misfortune.  Hopes are high that competitive action still awaits the latter this year but a nasty knee injury on 45 minutes looks to have ended the former.

The Leonard from Corofin know all about nasty injuries in recent years and both are determined to take their chance at redemption.  Tracey was the provider on 28 minutes for Roisin to bag a third.  She looked comfortable turning into goal making it 3-6 to 0-6 at half-time.

And for good measure, they continued rallying after the break even if Mayo did create some chances.  But the green and read needed Sarah Rowe’s first half strike or Emma Needham’s second half punch to raise green flags.  There was no saviour for Peter Leahy’s charges.

When Noelle Healy and co arrive for the All-Ireland semi-final, the intensity will raise even more and Galway must be ready.  But the pressure is now off and they can come to play.  Mick Bohan’s charges know they are in for a tough hour.  And Galway have nothing to lose.

Cork, Donegal, Dublin and Galway are the undisputed top four teams this year and the decision to move the Cork-Donegal semi-final back a week is to be applauded by the Ladies Football Association.  Camogie have done it before but both sports need their dual players to build their respective brands.

It’s just a shame the semi-finals clash with the Pope’s weekend arrival in Ireland because after 2017’s 46,000 attendance for the All-Ireland finals, ladies football deserves a second day in Croke Park.  It won’t this year but separating their senior semi-finals anymore is not going to be help brand expansion.

If the All-Ireland final figures are repeated again on September 16th, then 2019 has to be the year where Croke Park welcomes the senior ladies football semi-finals to headquarters as a double header.  If anyone has any doubts, just go to the upcoming instalment on August 25th.

Leonard and Ward (Galway), O’Sullivan and Finn (Cork), Healy and McEvoy (Dublin), McLaughlin and McMonagle-Bonnar (Donegal) would grace any arena.  There mightn’t be a better football double header played by any gender in 2018.

And Galway have arrived at the party and all signs suggest they are here to stay.  They mightn’t bridge the gap to 2004 just yet though that can’t be ruled out.  But they have finally guaranteed their place at the top table for the next few years.