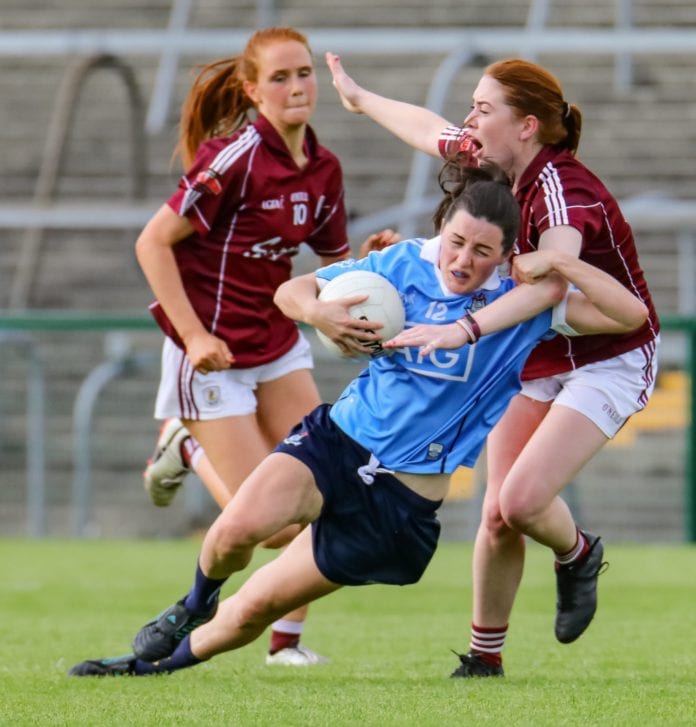 When the 2018 Galway ladies football year is reviewed, it will go down as a memorable 12 months where progress was made and the maroon and white reestablished themselves among the country’s elite.

They are not there yet with the Corks and Dublins of the world but they can hold themselves up with anyone else.  Along with Donegal, the top four this year were easy to define and Galway have every reason to believe a golden era is approaching.

Let’s not forget the All-Ireland winning under 16s and minors to go along with the 2017 triumphs for under 14 and under 16 maroon and white footballers.  And that year didn’t finish without a 10-goal display against Mayo in the under 21 decider.

Over the next few days, many will pick apart the bones of Galway’s disappointing loss to Dublin and some will wonder where the senior set-up goes from here.  For 30 minutes, the Tribeswomen looked out of their depth.  And then for 30 minutes, they showed what might have been.

4 goals for Dublin against Galway see them book their place in the TG4 All-Ireland Ladies Football Senior Championship Final against Cork.https://t.co/BqQE3RXKsX#properfan pic.twitter.com/iELuf2LjmX

It’s easy launch an assault and we have with other teams.  The first half was simply not good enough.  Despite the quality and form of the opposition, Galway got to this stage through work rate and they didn’t work hard enough.

The modern game of football is strongly influenced by mobility around the middle third.  When Galway attacked the opposing 45, Dublin had 11 players back ready to counter.  When the reverse happened, Galway had six back with four more struggling to make ground.

It was so out of characteristic with their 2018 displays but as manager Stephen Glennon alluded to when asked earlier, it was one of two poor halves all season.  They showed great heart to deliver an improved second half effort.  But it’s what’s learned now will be crucial.

Nobody ever questions (or should) the character of a player who dons a maroon and white jersey.  And this writer never criticises individuals for what they bring.  They are a team!  They’ll be praised like a team and criticised like a team!

Similar to the camogie outfit that exited the All-Ireland series, they need to watch the tape once and then put it away.  But the first half will suffice for the footballers.  It’s grand looking at an improved display but the contest was lost then.

No, first half maybe twice and then leave it there.  Remind themselves they are better than that performance but also that it can’t happen again.  These opportunities can come at a premium but they can’t be glanced over for the next one either.

Galway gaelic games has plenty of examples about how underage success doesn’t guarantee trophies down the line.  It shows the talent is there but these young players are only going to learn by those guiding their path.  And likewise, they have to heed lessons they pick up to ensure mistakes are reduced.

Stability will be important as well.  While Stephen Glennon and his management team reserve the right to make decisions about their future in their own time, it would be a shame if they didn’t go another year.

After the fall out from recent seasons, the Galway panel seems to be pulling together again.  And between young additions and the possible returns of players like Shauna Hynes and Megan Glynn, why can’t Croke Park be the primary aim for 2019?

One year ago, Galway were subject to embarrassing losses against Donegal and Cork.  This year, they were the only team to beat Dublin and while being below par in the semi-final, they went down fighting.  This panel has 12 months to see if they can get even better.

Cork and Dublin are rightfully the current ‘top dogs’ and their clash on September 16th could be a cracker.  But they aren’t unbeatable with Donegal and Galway showing they could compete.  It’s about finishing the job now.

Galway ladies football awaits the new year with anticipation and excitement.  It doesn’t guarantee anything but it’s a good place to start.  This team’s journey didn’t end last Saturday but it could be just beginning.