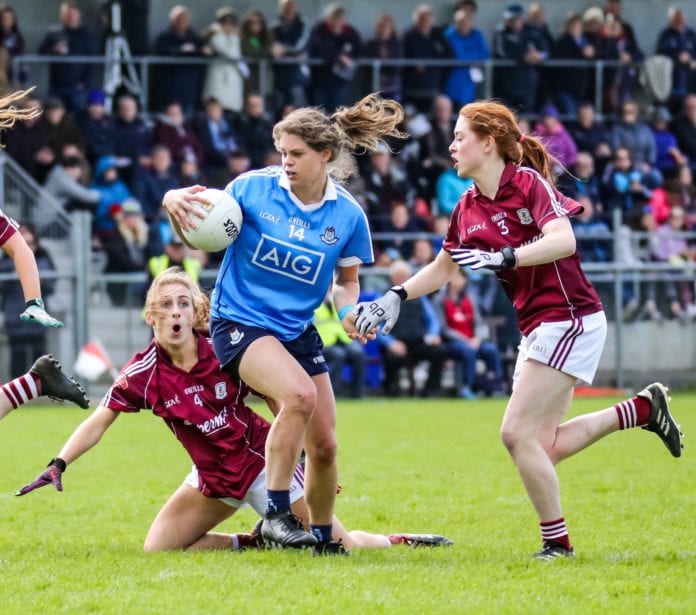 Galway ladies football could be sitting on the verge of a glorious era as they prepare to clash with the reigning All-Ireland champions in a semi-final where a first trip to Croke Park since 2005 could be within 60 minutes for the Tribeswomen.

Stephen Glennon’s side will be underdogs and won’t be expected to extend their year beyond this weekend.  But after finally achieving their target of a place at the penultimate stage, the Tribeswomen aren’t ready to throw in the towel.

Galway 2018 are a mentally, stronger outfit than 12 months ago and are the only team to beat Dublin since Mick Bohan’s team won the Brendan Martin Cup last September.

A 1-17 to 1-15 victory in Abbotstown was followed by a heartbreaking league semi-final defeat where a Nicole Owens goal allowed the Metropolitans escape with a 2-8 to 2-7 result.

Some lineup The Hyde on Saturday…

If you can’t make it to the stadium in Roscommon – all three matches are LIVE on @TG4TV 🎥 pic.twitter.com/NefUzQ1NgS

However, Galway beat Mayo in an epic Connacht Final before striking nine goals against Waterford and Westmeath and another five against their Connacht rivals two weeks ago.  Roisin Leonard, Leanne Coen, Ailbhe Davoren and Caitriona Cormican the goal scorers in a 5-11 to 0-12 win against Mayo.

It’s Galway’s first semi-final since 2014 but to make the final, they’ll need to deal with a rampant Dublin attack.  Owens, Lyndsey Davey, Carla Rowe, Sinead Aherne, Niamh Evoy and Noelle Healy are a handful for anybody.  Discipline will also be key as Galway can’t afford to be picking up yellow cards.

Galway have five survivors from their 2014 semi-final loss, also against Dublin, so Burke, Flaherty, Cormican and the two Wards know what to expect.  These two teams like to attack and supporters travelling should get their money’s worth.

The match-ups between Galway’s back six and Dublin’s attack will be crucial.  However, Galway have proven they are up for the challenge.  They are up against it but the pressure is off.  And if the they play to their potential, they can deliver an All-Ireland Final place.

The Game Will be Broadcast LIVE! on Galway Bay FM.