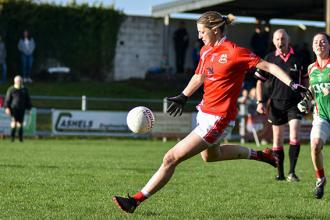 After near misses in the last two games, the scores came for Annette Clarke last Sunday (21st October) as Kilkerrin/Clonberne brushed aside the Kilbride challenge and booked their place in the Connacht Final.

Clarke’s attempted fisted point dropped underneath the crossbar after just six minutes before she took Louise Ward’s pass for a second 12 minutes later.

The 2004 All-Ireland winning captain finished the game with 2-3 and also led Kilkerrin/Clonberne the last time they overcame Carnacon in 2015.  And now that the rematch is set up, herself and the team are looking forward to the provincial decider.

“We just take every game at a time,” said Clarke afterwards.  “When we won the county final, the next game (was) the Connacht semi-final to try and get into a Connacht Final.  And we’re in a Connacht Final so we’re happy with that.

“Nobody wants to miss.  I think I got the second goal (and the third).  It’s a team game at the end of the day and we just all try and do our best when we’re out there.  We try and give it to the player that’s in the best position.  And it’s all about getting the team score at the end of the day.

“We always take one game at a time.  After today, we’ll sit down tomorrow and reassess and get ready for a Connacht Final.

“I literally just heard there.  I think they won, Carnacon.  So, it’s a Carnacon (verses) Kilkerrin/Clonberne final.  We’re looking forward to that.  I’m sure they are as well.  We’ll think about it tomorrow and we’ll prepare for the next two weeks.

A warm up injury to goalkeeper Lisa Murphy led to Leah Pettit taking her opportunity saving a Casey Keane 51st minute penalty.  It highlighted the team effort the Clarke states is important if Kilkerrin/Clonberne are going to continue progressing.

“Leah Pettit went into goal,” concluded Clarke.  “Leah was part of our minor squad as well and I know she’s played underage in goal in soccer.  It’s everyone for the team.  Lisa (Murphy) had picked up a slight injury coming into it and Leah stepped in and she saved a penalty.  Fair play to her!

“Lisa, she’s a tough fighter and hopefully she’ll be back.  But it’s all about the team performance and I’m sure Leah was literally just asked and no bother, in she went to goal.”