Handball: MOYCULLEN NAMED CLUB OF THE YEAR AT ALL-STARS 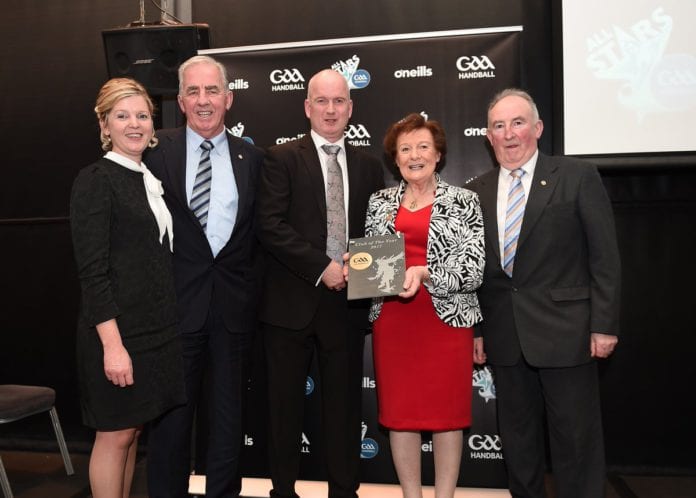 Moycullen Handball Club were named Club of the Year at the 2017 O’Neill’s GAA Handball All-Stars that took place in Croke Park on Saturday night (3rd February).

Out of four nominations for the west Galway club, they picked up the ultimate prize in an exciting new format that also saw Diarmuid Mulkerrins, Tony Audley and Martin Mulkerrins in contention.

Galway interest didn’t finish there as Claregalway’s Joe O’Connell won the Administrator of the Year Award while Seamus O’Fathearta was among four Hall of Fame inductees.

Administrator of the Year 2017:

Moycullen were announced by MC Eileen Dunne as Club of the Year rewarding their continued success on and off the field.

In recent years, Moycullen handball club has continued to develop its facilities and now boasts two top class 40×20 courts and a state of the art 60×30 court. Total costs exceeded €345,000 of which only €102,000 was grant funded.

The completion of the viewing galleries in Spring 2017 concluded seven years of hard work and dedication of a very committed committee.

The facility is among the finest in the country and has hosted the Juvenile Nationals Finals for the last 2 years. The club has more than 120 members and continues to promote and develop the game of handball not only locally but internationally.

Moycullen boasts a long tradition of handball going back to the 1920s. The new facilities have sparked a strong resurgence and the club has claimed nearly all available juvenile titles in the last 10 years along with a list of collegiate and world titles.

Winning ways are not confined to the youth grades as many Masters grades and over 70s have also been victorious both at home and abroad.

The main Player of the Year Awards went to Armagh’s Charly Shanks and Cork’s Catriona Casey.

Martin Mulkerrins had been nominated in the above category while Diarmuid Mulkerrins was also acknowledge in the young player lists only to lose out to Cork’s Tadhg O’Neill.

While Tony Audley’s work with Moycullen club didn’t go unnoticed seen him among the contenders for Club Official of the Year with Tyrone’s Michelle Warren picking up that award.

Planning permission is being sought for an overhaul of the Oranmore Community Centre that will include a new all weather spectator stand and external...
Read more
SPORT

NUI Galway has announced a new partnership with Rowing Ireland which will help develop the high-performance programme at NUI Galway.The college will become an...
Read more
NEWS

Lough Cutra Castle Triathlon and Multiport Festival is usually the first to kickstart the triathlon racing season in the West of Ireland, but it...
Read more
Facebook
Twitter
Pinterest
WhatsApp