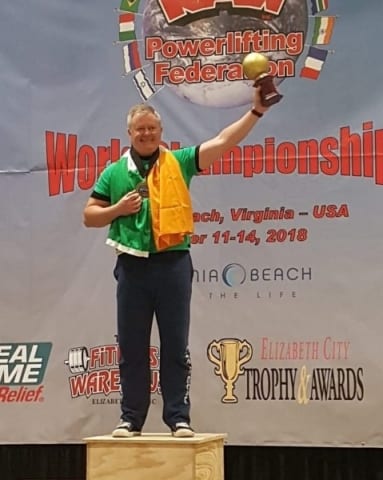 After only taking up the sport three years, Dr Mac Hale was part of the Irish team that faced off against competitors from US, Canada, Australia, China and India and more.

The professor from the School of Science & Computing took the gold in the World Push/Pull event, cane second in the World Powerlifting and World Bench Press events, and third in World Deadlift.

The Irish side of the ten strong ladies’ team, and six person men’s team, placed fifth in the competition overall.

Speaking about his experience David said, “I was privileged to be a small part of a brilliant, fun and talented bunch of athletes who flew the Irish flag with pride.”

“I would like to thank my GMIT managers, Dr Lisa Ryan and Dr Seamus Lennon, for accommodating my request to represent my country.”

Max Lauth runs Maximum Results Gym in Parkmore and has been working with David to oversee his training to compete at powerlifting.

David expressed his extreme gratitude to Max for helping him to develop as a powerlifter.

He went on to thank all the people that made this victory possible, “Dr Lisa Ryan and Dr Seamus Lennon, for accommodating my request to represent my country.

“Special thanks to the Irish team, who were such a help and inspiration both on and off the platform and a big thanks, of course, to the Irish officials led by President Kevin Barry who did such a professional job running the platforms.”

“Most importantly, a heartfelt thank you to my family for being so patient with me over the last few months,” he added.

“Lifting the Irish flag with my team mates and friends has been the greatest honour I have had the good fortune to experience. I am deeply humbled by the whole experience and I thank everyone involved for helping me to achieve this.”

When he’s not lifting, David lectures in chemistry at GMIT, and has also taught on the Sport and Exercise Science course.

Powerlifting is a competitive strength sport where athletes compete individually and attempt to lift the maximum weight possible for a single repetition.

Athletes can perform in up to three competitive events; the squat, the bench press and the deadlift.

The lift is judged by three referees, with athletes getting three attempts to lift the heaviest weight possible for each event.

Only the heaviest successful lift is counted. At the end of the competition, the athlete’s best lift for each event is added together to give a final total. This total is called the ‘Full Power’ event.

In addition, a second ‘Push-Pull’ event, comprising the best lifts in bench press and deadlift may be added together.

As well as these combined events lifters can compete in just a ‘Single Lift’ event for squat, bench press and deadlift.

In conjunction with weight classes, age groups and gender, the best lifts are used to determine the athlete’s placing in each competition.