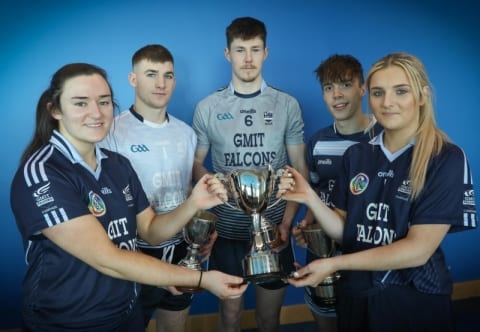 Though it might be spread across different counties, GMIT has launched a new brand to bring all its sports activities under one identity, the Falcons.

The new brand forms part of an overall sports strategy which has been rolled out by GMIT over the past number of years.

This has involved building partnerships with different sports club near all of GMIT’s campuses.

The Institute of Technology has also been developing its own facilities, with planning permission secured for a multi-purpose sports and educational services building at the main Galway campus.

Plans are also progressing for more sports and recreational facilities on GMIT owned lands near the Dublin Road campus.

Speaking at the launch of the Falcons, Dr Michael Hannon, Acting President of GMIT said he was pleased to ring in a new identity for sports at the IT.

“Nelson Mandela spoke of the power of sport uniting a country. We all know the place of sport in local communities in this country, and here in GMIT we are a community of those communities – of several thousand people from diverse backgrounds and interests.”

“Sport is often viewed as an analogy for life in general. When you read famous quotes from world renowned sports stars, you would not be surprised to see themes like motivation, effort, hard work, practice.

“Many speak of failure or defeat as ingredients which are just as important to reach the pinnacle,” Dr Hannon said.

“For those who participate in sport, they can especially relate to this, but the messages are equally germane to everybody.”

The GMIT Falcons, and the new kit for different sports teams, was formally unveiled at a special function attended by students, staff and representatives from sports organisations across the region.

The new identity is meant to convey agility, grace, speed and ferocity while the predominant shades of blue echo the traditional blue of the Connacht coat of arms.

Student teams have been wearing the new kit since January and it is planned to extend the range to leisure wear and other branded accessories.

Aaron Burke, President of the GMIT Students Union, said, “We are delighted to see the launch of this new identity which is attractive to all students not only those who represent GMIT in sports events and competitions.”