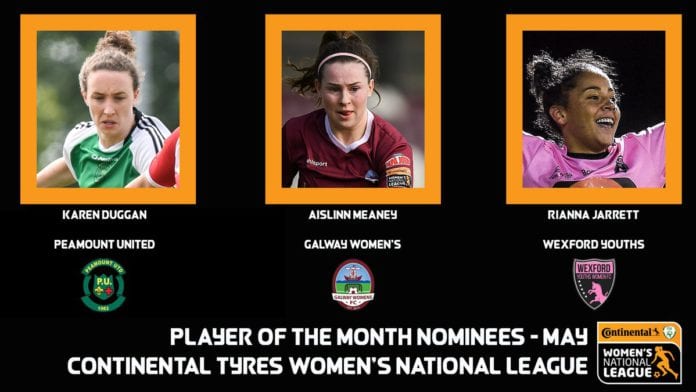 The Continental Tyres Women’s National League Player of the Month nominees for May 2018 have been confirmed and Galway WFC’s Aislinn Meaney is among the three contenders.

Meaney was nominated in March/April as well and she has already scored three goals for Galway this season.  The Irish international has maintained her high standards both domestically and for her country.

The Clare woman made her international debut in January 2018 against Portugal and is currently in her first year studying Arts in NUI Galway.

She joined the Tribeswomen from Lifford Ladies and made her Galway league debut at just 17.  The 19-year-old also spent time in the Irish Youths set-up after being selected back in 2014.

She is nominated alongside Wexford Youth’s Rianna Jarrett, who was called up to the Irish Team, and Karen Duggan from Peamount United, who moved from UCD Waves before the campaign.

Galway Women’s FC next outing in the Continental Tyres Women’s National League is against Shelbourne LFC on Saturday, 23rd June.  Kick-off in the Morton Stadium is 4pm.