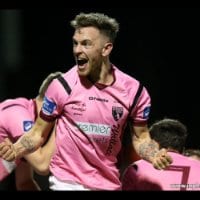 Owen Cowzer in the Irish Sun reports that the Rosslare native has been released by New Zealand side Southern United allowing him to link up with Shane Keegan who he played under for three years in Wexford.

CONGRATS | The #ISPSHandaPrem Player of the Week is Danny Furlong, whose two late goals against @WaitakereUTD earned a first win for @southern_united in dramatic fashion! pic.twitter.com/YQLHR22bJd

The 28-year-old has more than 100 competitive goals in his career since debuting for South East side in 2008 and is their all-time top scorer.  After four years there, he joined Waterford United and Cork City before returning to his native club before the 2014 season.

Indeed, Galway United fans might remember him from one of the most exciting games in recent memory.  In October 2016, Furlong scored two goals as Wexford went 5-0 clear of the Tribesmen before Galway responded falling just short with four goals in a stunning comeback.

Furlong left Ireland after that campaign to take up a coaching role with Dunedin before lining out for Southern United where he continued to build his impressive scoring tally.

Southern United have announced his departure and the signing is a major coup for Keegan as they aim to get back to the top flight at the first time of asking.

It is with both sadness & our best wishes that we farewell popular striker Danny Furlong, who has signed a 2 year professional contract –
Full story here:https://t.co/tziDikBnIm pic.twitter.com/GZ1mqsovYF

“It’s been a massive decision to make and one I haven’t taken lightly,” said Furlong to Cowzer about his decision to return home.  “But at this stage of my football career, an opportunity like this probably won’t come around again.

“Being so far from family and friends has been challenging.

“So, the combination of an offer being presented that I never expected and wanting to be closer to my family, means I’ve decided to return home to Ireland.”