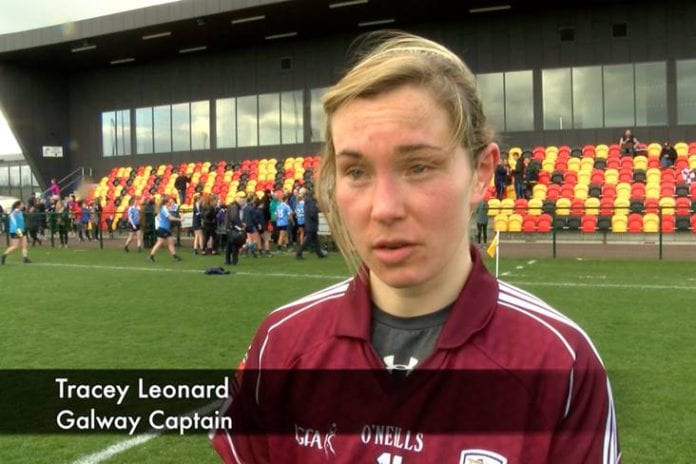 Galway’s ladies football team picked up a massive result in Abbotstown on Sunday when they defeated reigning All-Ireland champions Dublin to move within touching distance of the semi-finals.

A Caitriona Cormican goal put the Tribeswomen in the driving seat but it was two late frees from Galway captain Tracey Leonard that gave Stephen Glennon’s charges a 1-17 to 1-15 win.

One more victory against Cork or Westmeath will secure Galway a final four spot and afterwards, Leonard talked to us describing the result as a sweet win.

Hear The Full Interview BELOW

See the moment Nicola Ward broke Dublin hearts today in the Lidl NFL. With the scores level at 1-15 apiece, the Galway No 6 turned over possession and ran deep into Dublin territory to win a free. Commentary is supplied by Nicola's Dad! @LadiesFootball pic.twitter.com/JKCYQTZtZD

Video: See Galway's only goal in today's surprise victory away to All Ireland champions Dublin in the Lidl NFL.. https://t.co/jwdSywcPr9 pic.twitter.com/Wvg8PoGUlc

Galway 1-17 Dublin 1-15 full time in Abbottstown!! A great display and win for Galway against the All Ireland champions!!