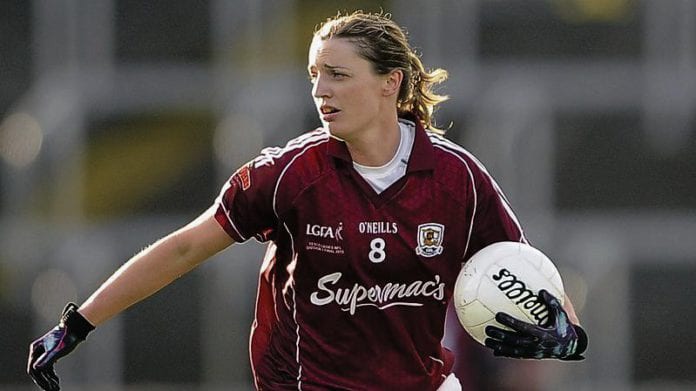 She was the favourite and delivered in every round as the title of ‘Galway’s Greatest Ladies Footballer’ went to the 2004 All-Ireland wining captain after the competition finished on Friday morning (1st June).

The two-time All-Star has played a key role in Kilkerrin/Clonberne’s recent domination of the domestic scene and her impact on Galway Ladies Football was acknowledged in 2016 when she was the subject of an episode of TG4’s ‘Laochra Gael.’

The main woman herself, Galway's Annette Clarke…what a football career this woman has had, so far! @annette_c0ll1ns pic.twitter.com/82RB0IOdfl

Clarke’s involvement with Galway didn’t end upon her retirement after 2015.  She was a member of the Tribesgirls’ management that won the 2017 All-Ireland under 16 title.  And, along with her husband and team manager Kieran Collins, are part of the minor set-up that won the 2018 Connacht championship.

Niamh Fahey came second with 19% of the vote ahead of Caitriona Cormican (18%) and Edel Concannon (15%).  But Clarke’s 48% tally had her the firm favourite from early on.

We’d like to thank everyone who supported the contest and the results of the final are listed below.  And as an extra treat, here is the greatest Galway ladies football team ever based on your results.

WHO DO YOU FEEL IS GALWAY'S GREATEST EVER LADIES FOOTBALLER?