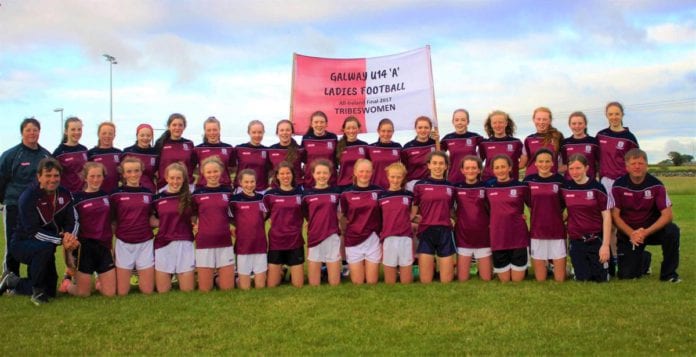 Galway’s under 14 ladies footballers will begin the defence of their Connacht and All-Ireland titles will begin this Monday (7th May) when they take on Mayo in the provincial final.

The two teams will collide in Davitts GAA Club, Ballindine at 12pm with the winners advancing to the All-Ireland semi-final against Ulster opposition on the weekend ending May 27th.  Down meet Monaghan in that final.

The Tribesgirls have been dominant in Connacht in the last few years and beaten their rivals 6-14 to 3-6 in 2017 to set up an assault on the national scene.  They continued the high scoring in the semi-final beating Dublin 6-23 to 3-3.

Galway and Kerry battle it out in the All Ireland Ladies Football Under 14 A Final! #GAA pic.twitter.com/OsNU5Scfq6

And on July 1st, they left nothing to chance as Stephen Hession’s charges ran out 6-9 to 1-14 winners over Kerry with Laura Kelly getting a hat-trick, Kate Slevin got two green flags and Ellen Power also hit a three-pointer.

Galway take on Mayo in the 2018 Connacht under 14 Ladies Football Final on Monday, 7th May.  Throw-in in Davitts GAA, Ballindine is 12pm.