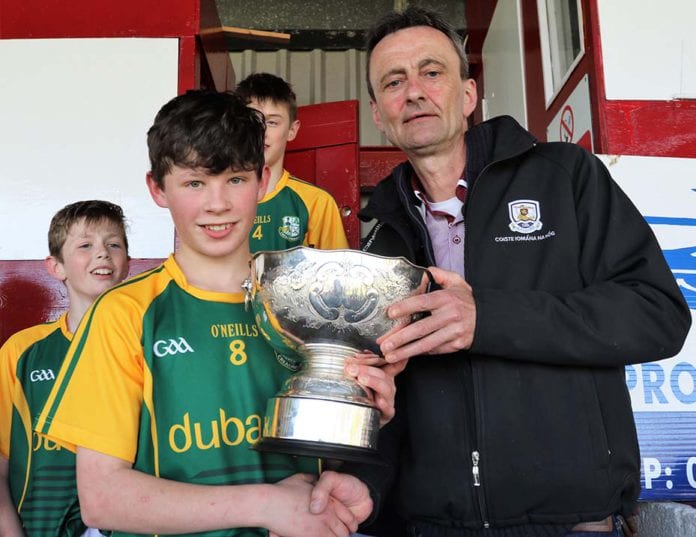 The annual County under 14 Feile Competitions begin tonight (Wednesday, 11th April) with action taking place throughout the county up until next Sunday.

Young squads across Galway will go in search of silverware but also the opportunity to take part in the annual National Event which takes place in Connacht in June.

Best of luck to our U-14 Hurlers who take on Clarinbridge this evening Wednesday 11th April in Round 1 of the Toddy Byrne Cup in Féile na nGael @ 6.30pm in the Training Pitches.
Best of luck to the young lads and mentors.
All support welcome. 💚💛#gaa #féile pic.twitter.com/ww9dChHWUF

Craughwell are the defending champions after beating Turloughmore in the 2017 Final.  Ardrahan were victors against Meelick/Eyrecourt in the Justin Cheevers Cup Final.  Annaghdown prevailed over Mountbellew/Moylough to win the Toddie Byrne Shield.

Sixteen teams will take part in the Toddie Byrne Cup in four groups by four.  Games take place Wednesday and Friday evening followed by the third round on Saturday morning.  The four group winners qualify for Saturday evening’s semi-finals.  The finals take place in Kenny Park on Sunday.

The Cup is named after Kinvara man Toddie Byrne who was one of the founding members of the Galway Juvenile Board in 1965.  And the board honoured Toddie’s memory by naming this prestigous competition after him in 2011.

The same format will apply for the Justin Cheevers Cup with 16 teams competing for four semi-final places.  Justin Cheevers played for Craughwell and was just 17 years old when he died in 1990.  The competition for B and B1 clubs is named in his memory.

There will be nine clubs competing in the Toddie Byrne Shield with two groups deciding Sunday’s finalists.  The participating teams in each section are named below.  For a full list of all group fixtures, click the Galway GAA website page HERE.