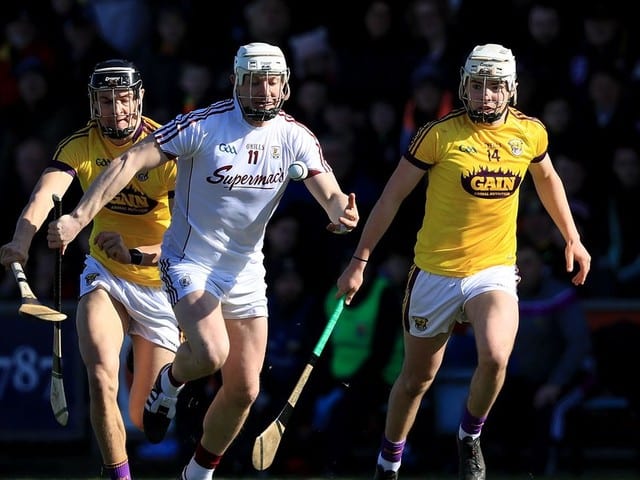 Galway qualified for a fourth consecutive Leinster Hurling Final after coasting to a dominant victory over Wexford in Innovate Wexford Park on Saturday (2nd June).

It was an emphatic statement by the All-Ireland champions who struck with a Conor Whelan goal in the second minute and always kept the hosts in the rear-view mirror afterwards.

The home fans were asking questions about their ‘sweeper’ tactic that didn’t derail the visitors.  If Micheal Donoghue has one concern leaving the South East, it was the departure of Joe Canning with a knee injury that hopefully won’t be too serious ahead of the provincial decider on July 1st.

Canning was immense getting 12 scores, including his 450th career point, and also treated the travelling Galway support to two excellent sideline cuts in both halves.

But before Portumna’s centre forward started controlling proceedings, Conor Cooney continued his impressive form tallying in the opening minute and finished the first half with four from play.

Donoghue made a late change starting Johnny Glynn ahead of Brian Concannon and he caused Wexford’s defence problems.  But when Whelan hit the goal followed by Cooney’s second minor, Galway were 1-2 to 0-0 clear.

Wexford finally got off the mark on six minutes through a Rory O’Connor free.  He finished with a dozen points but Davy Fitzgerald will have much to ponder ahead of their winner-takes-all meeting with Kilkenny the following weekend.

Paudie Foley, Paul Morris and Aidan Nolan did register but Wexford finished with just seven points from play and 13 wides.  Their status as genuine championship contenders rattled by the team currently sitting on the perch.

Canning, Conor and Joseph Cooney, Whelan and David Burke gave Galway a 1-12 to 0-9 interval advantage but after the restart, they continued pulling clear.  Whelan and Canning put eight between them.  Nolan scored for Wexford before three Canning placed balls made it 1-17 to 0-10 on 46 minutes.

The contest fizzled out as Wexford depended on O’Connor contributed their remaining scores.  Adrian Tuohey did get a second yellow card and Canning’s departure will be monitored.  But they remained at arm’s length as Niall and David Burke and Jason Flynn wrapped up an impressive win.