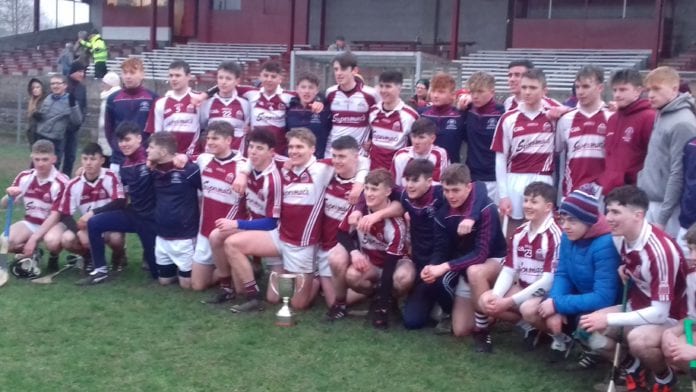 Presentation College, Athenry were crowned Connacht Post Primary Schools Senior A Champions on Saturday after two dominant spells either side of half-time allowed them run out 2-19 to 1-8 winners over Gort Community School.

Adam Brett struck the two goals and Mark Kennedy chipped in with six points from play as the Athenry school won their fourth provincial title in five years.

Gort will now face St. Kieran’s College, Kilkenny in the All-Ireland quarter-final next Saturday (3rd March).  Athenry are into the semi-finals and will face CBS Midleton or Kilkenny CBS on Monday, 19th March.

After their victory, we spoke to Presentation Athenry Man of the Match Mark Kennedy.

“It was a great game especially in the first half,” said Kennedy.  “They had a sweeper back (when) we were with the breeze.  So, they were trying to pull it back a bit.  We’re just delighted to get the win.

“We knew coming out they were going to hit us with everything.  The lads played them (through) underage and they were always very physically strong.  And we just knew if we could get a good start, it would set us on a good way for the second half.”

“It just came to me and took a shot,” he added when asked about Oisin Higgins’ saving his first half goal chance.  “It was a poor enough finish but it was good save from him.  He set up well.

“Every game, we’re trying to take it one game at a time.  And it’ll be no different now the next day whoever we’re playing.  We’ll probably be the underdogs so we’ll go out and give it a good rattle anyways.

“It was great to see lads like Brandon (Lee) and Tom (Quirke) coming on there at the end.  As Mike (Finn) says throughout the year, it’s a panel effort and everyone’s pushing together trying to get one thing.  And that’s to hopefully compete in the All-Ireland series.”

1of2 @PresAthenry won the Connacht Post Primary Schools Senior A Hurling title for the 9th time in our school’s history last Saturday when defeating Gort Community School on a scoreline of 2-19 to 1-08. This is the 4th time in the past 5 years where we have won this title. pic.twitter.com/qyugLsH0GZ