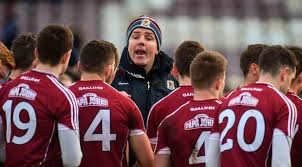 Galway picked up their first win over Kerry since 2003 on Sunday in Austin Stack Park, Tralee to pick up their fourth consecutive win in Division One of the National Football League stayed on par with leaders Dublin.

Eamonn Brannigan’s 40th minute goal gave the Tribesmen a six-point advantage they held until the end and now makes an unlikely league final appearance a probability for the newly promoted side.

Great win for Galway today against @Kerry_Official . Tralee is no easy place to get out of with two points. @TribesmenGAA

Really good from Galway today. Defended with big numbers behind the ball and broke with huge pace. Their system suits their players down to the ground. As we knew already, Kerry are still very much a work in progress.

“There was a bit of pressure on today,” said manager Kevin Walsh to the assemble media afterwards.  “A lot of people, including ourselves, were looking for a bit more consistency. We felt we had, maybe, improved on that last year, getting out of Division Two. We had to improve on that again. We’ll take this result.

“There was a double save there at the end by Ruairi Lavelle. That kept the win for us.  We’d be disappointed if we lost because of the chances we had before that.

“We would have put a bit of effort in to the fitness side of it, to date.

“The FBD league final came at a good time for us. A lot of our guys who were itching to get off the bench got off it and performed quite well. They are starting to fight for positions. You have to have a certain fitness standard at this time of year. Time will tell. It would have been our objective to stay up.”