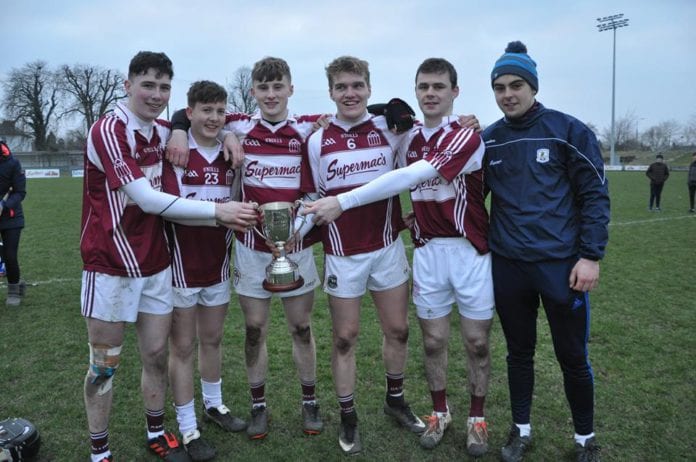 Presentation College, Athenry were crowned Connacht Post Primary Schools Senior A Champions on Saturday after two dominant spells either side of half-time allowed them run out 2-19 to 1-8 winners over Gort Community School.

Adam Brett struck the two goals and Mark Kennedy chipped in with six points from play as the Athenry school won their fourth provincial title in five years.

1of2 @PresAthenry won the Connacht Post Primary Schools Senior A Hurling title for the 9th time in our school’s history last Saturday when defeating Gort Community School on a scoreline of 2-19 to 1-08. This is the 4th time in the past 5 years where we have won this title. pic.twitter.com/qyugLsH0GZ

Gort will now face St. Kieran’s College, Kilkenny in the All-Ireland quarter-final next Saturday (3rd March).  Athenry are into the semi-finals and will face CBS Midleton or Kilkenny CBS on Monday, 19th March.

After their victory, we spoke to Presentation Athenry captain Conor Walsh.

“I suppose Connacht Finals are always going to be tough,” said Walsh.  “We were under no illusions today that needed to bring a strong performance.  I know we did for large stages but there’s so much to work on there.

“Gort are an exceptional team.  They’re a young team and I’ve no doubt they’re going to be hugely competitive over the next few years.  Connacht finals, they’re not easily got so thankfully we got over the line today.

“We got the rub of the green today and that was huge.  A lot of our boys did the right thing.  And luckily enough, we got the breaks today.  The ball could have bounced Gort’s way today and things could have been a lot different.  Gort and ourselves now have the honour of going on and representing Galway.  So, we’re going to go on and try and give it a lash the both of us.

“We’ll definitely enjoy this.  They don’t come along often.  And after losing last year, we had extra bit of belief I suppose and just to drive it on this year.  It’ll be back to work over the next week or so and back to basics.  And trying to get ourselves right to be competitive in the next game is key for us.  And hopefully we can do that.