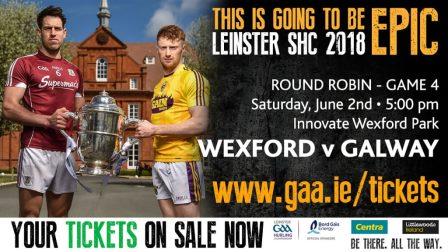 It’s not coming from Galway! Indeed, it’s coming from the confines of the geographical hurling patch in Leinster.  But Wexford may have to prove themselves again and book their place in a second consecutive Leinster Hurling Final.

The Tribesmen beat Davy Fitzgerald’s charges 0-29 to 1-17 in that decider in July but they have already relinquished one of their 2017 trophies having lost to Wexford in the league quarter-final.

Both teams have maximum points from two outings and the winners will be in the provincial final.  It was in Wexford Park that the Slaneysiders lit up last year’s championship beating Kilkenny but they won’t want to head to Nowlan Park needing a result the following weekend.

They dismantled a tired Offaly 5-24 to 2-9 after suffering a scare against Dublin.  But Fitzgerald will have heard talk, notably from former referee Brian Gavin on Midlands 103, who felt Wexford were behind Kilkenny and Galway and fancied Offaly for a result last Saturday (26th May).

With Mark Fanning in goal; Damien Reck, Liam Ryan and Paudie Foley in defence; Aidan Nolan and Sean Murphy around the middle; with Lee Chin partnered by the O’Connor brothers (Jack and Rory) up front, a trophy is Wexford’s summer target.

Of course, Galway manager Micheal Donoghue won’t be buying into any hype about his team or Wexford and the Tribesmen will be hell bent on getting the result that secures them Croke Park action on July 1st.

They’ve scored six goals in 2018 (three times as many as last year) and always looked in control in their 1-22 to 2-11 win over Kilkenny in Pearse Stadium.  Canning got 1-12 and Conor Cooney converted four points and they will go into this contest as 2/5 favourites.

Much has been made about the five round-robin rounds played on consecutive weeks and Wexford are heading into their third game in succession while Galway had a break between their Offaly and Kilkenny assignments.

This is a must-win game for both but it vital for Wexford!  A home game in front of their passionate support and a Leinster Final the prize.  They won’t want to need a result in that game.  Galway will want to keep their seven-game unbeaten championship run intact.  It promises to be a cracker!