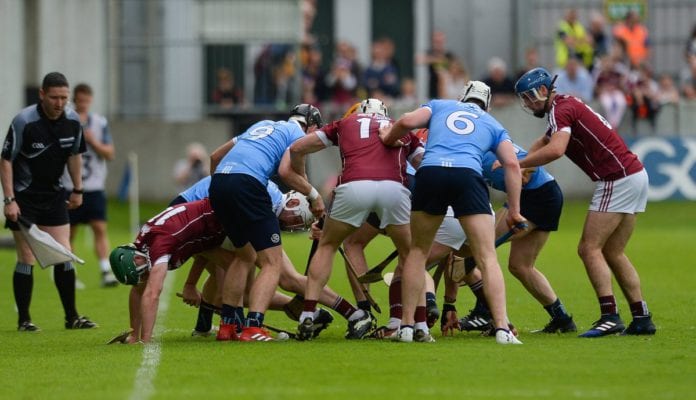 All roads lead to Pearse Stadium the following Sunday (March 4th) when Galway face Limerick to decide who gets promoted to Division 1A of the National Hurling League but Micheal Donoghue’s charges won’t take their eye off the ball regarding Sunday’s trip to the capital.

The talk leading to this fourth-round tie has been the disappointing start to Pat Gilroy’s term with the Dublin hurlers.  They lost to Offaly the first day, scraped past Antrim, took a heavy 12-point defeat to Limerick, and are now fighting to avoid the 1B relegation play-offs.

They are without their Cuala contingent who meet Limerick’s Na Piarsaigh in the All-Ireland club final on St. Patrick’s Day.  And their DCU contingent have the Fitzgibbon Cup Final meaning Eoghan O’Donnell, Donal Burke, Fergal Whitely, Rian McBride and Daire Gray will missing.

After taking over from Ger Cunningham, Gilroy has brought back previous players like Alan Nolan, Conal Keaney and Danny Sutcliffe.  The latter two shared seven points against Limerick but they are a work in progress and will take time to start testing the top teams again.

This contest also brings Anthony Cunningham and the Galway hurlers together for the first time since Cunningham was ousted as Galway boss following the 2015 All-Ireland Final.  The St. Thomas man has joined Gilroy’s backroom team and his presence opposite his former squad is an interesting subplot.

Mickey Whelan, former Galway Hurling manager Anthony Cunningham and Paddy O'Donoghue have been confirmed as Pat Gilroy selectors for the Dublin Senior Hurlers. Whelan and O'Donoghue were both selectors with Gilroy when he led the Dublin Footballers to the 2011 All Ireland title. pic.twitter.com/YZwEpWEjur

But it won’t make any difference.  Galway won three trophies in 2017 and have picked up victories over Laois, Antrim and Offaly.  The result won’t affect promotion or league quarter-final ambitions.  But having gone a year undefeated, Donoghue will want that record maintained.

Joe Canning, David and Daithi Burke are not back but others have done well.  Goalkeeper James Skehill has been consistent; Padraic Mannion, Aidan Harte, Martin Dolphin and Sean Loftus have caught the eye; while Joseph Cooney, Cathal Mannion and Conor Cooney shared 2-13 against Offaly.

Dublin won their last league meeting in 2016 by 1-17 to 0-13.  But Galway were comfortable 2-28 to 1-17 winners in the 2017 championship.  They’ve shared two ‘Super 11s’ brawls in Boston but they are on completely different levels in the current hurling hierarchy.

Expect the Metropolitans to have a go in Parnell Park.  But also expect Galway’s fringe players to make one last stab for inclusion before business picks up seven days later against Limerick.