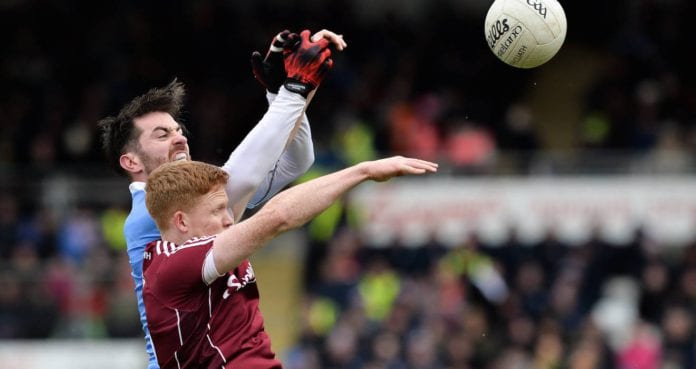 Galway couldn’t stop Dublin clinching a fifth National Football League title in six years on Sunday but Kevin Walsh’s team ended their spring on a positive note ahead of facing Mayo in the Connacht championship on May 13th.

Late points from Philly McMahon, Eric Lowndes and Dean Rock eventually ensured Jim Gavin’s team atoned for last year’s loss to Kerry ahead of their attempts at a fourth consecutive All-Ireland title in the summer.

Galway were the only unbeaten team in Division One but were expected to struggle against the Metropolitans in Croke Park.  However, they stayed with their illustrious opponents for most of the contest only to finally be taken down in the final five minutes.

Rock and Paul Mannion gave Dublin an early 0-2 to 0-0 lead but Barry McHugh and Johnny Heaney levelled affairs by the 10th minute.  Mannion forced a stop from Ruairi Lavelle within seconds of the throw-in, the first of three saves from the Inisbofin keeper.

The teams shared six points before McHugh put Galway 0-6 to 0-5 ahead on 21 minutes.  It was the only time Kevin Walsh’s side led though they did go in 0-8 apiece at half-time.  Mannion and Rock put Dublin back ahead but Heaney ensured parity.

Substitute Colm Basquel kicked two minors upon the resumption for an 0-11 to 0-8 Dublin advantage but Galway clawed back the deficit again before Shane Walsh made it 0-12 apiece.

Dublin were down to 14 players following a second yellow for Niall Scully but their experience in big game environments was starting to tell.  After the teams exchanged minors again, Rock got through forcing another great stop from Lavelle.

The Ballymun Kickhams free taker converted the resulting 45 before Ciaran Kilkenny put two between the teams.  However, Damien Comer, who terrorised Dublin’s defence on occasions, reduced arrears to the minimum setting up a mouthwatering finish.

However, Dublin pushed for the line with their three late points to clinch a 13th league crown.  Galway’s hopes of bridging a gap to 1981 must wait another year but they gave a good account of themselves showing their intent ahead of the Connacht championship next month.