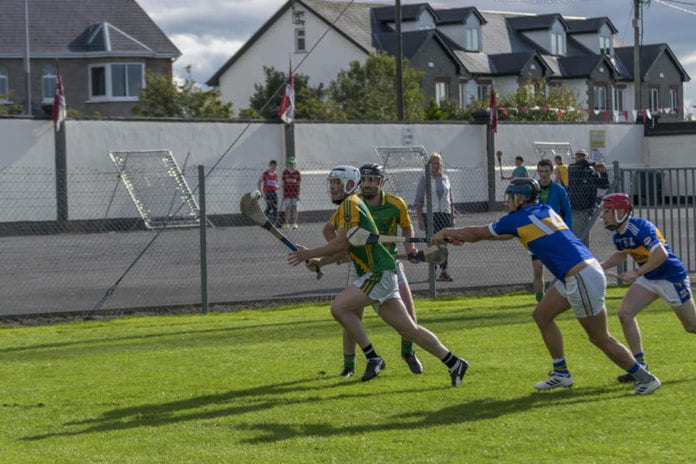 Oranmore/Maree secured their place in the knock out stages of the intermediate hurling championship on Sunday when they beat Meelick/Eyrecourt 1-11 to 0-12 in the Group 2 top of the table clash.

Gerry McInerney’s charges made it three wins from three in Gort to ensure they’ll take one of the top four slots after the group stages are complete.

Meelick/Eyrecourt hold second spot with four points and will be expected to advance but only hold a one-point advantage over An Spideal who played out a cracking draw with Sylane on Saturday.

For Sylane, it was the first point of the campaign for the 2017 Junior champions and leaves them just one behind the two teams ahead of them for a coveted quarter-final place.

Rahoon/Newcastle edged a tight match on Saturday in Pearse Stadium to emerge 1-15 to 1-14 winners over Carnmore, also picking up their first points of the year.  It leaves them level with Carnmore in fourth spot just behind An Spideal.

Nobody secured their place in Group 1 thought with seven teams, and another round next weekend (September 7th – 9th), a few should be assured of their status in seven days.

Kilconieron beat Kilbeacanty 0-22 to 1-16 on Saturday in Loughrea to move to five points from three games.  And they share top spot in the table with Kinvara who were triumphant over Castlegar 2-18 to 2-10 on Friday evening in Kenny Park.

And Kiltormer held on to defeat Annaghdown 1-19 to 1-17 on Sunday in Loughrea to stay just one point behind the leaders.  Killimor had the bye and are among the chasing pack for the last spot.

Kilconieron will qualify if they beat Killimor in Kenny Park on Sunday (9th September).  And Kiltormer will be effectively through if they get a similar result over Kilbeacanty in Loughrea.  On Friday (7th September) in Kenny Park, Castlegar and Annaghdown battle for survival.