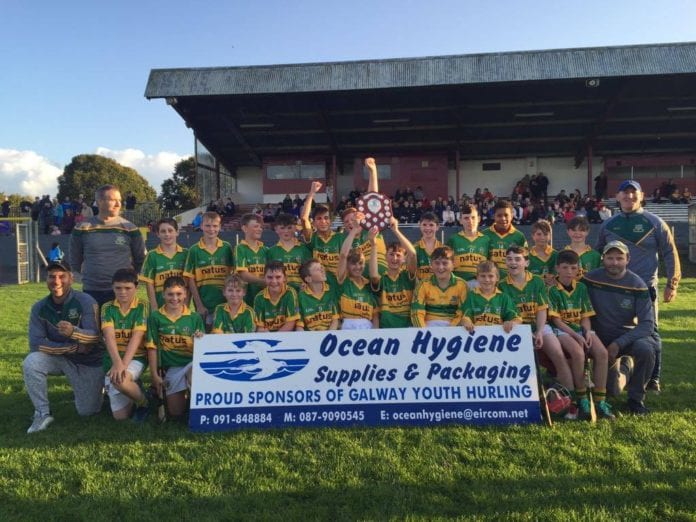 Their accuracy was vital as Gort were crowned county champions with three second half frees against the wind from Dylan Murphy putting them into a winning position.

In a contest that turned into a battle between two strong teams, neither side couldn’t take advantage of the strong gust blowing down Ballinasloe but Ahascragh/Fohenagh will rue eight wides, especially in the second 20 minutes.

The sides were level 1-2 apiece at half-time after an eventful opening eight minutes that saw the teams both hit the net.

It was the perfect start for Seamus Moclair’s team who added another minor from Calum Finnerty to lead 1-1 to 0-1 after two minutes.  But Gort played their way back.

Murphy was their key man and a free reduced arrears before they got their breakthrough.  Ben O’Donovan’s skill gained ground and was complimented by Shane Naughton and Eric Hardiman’s industry to send play in to the square.

Richard Oliveria da Silva awaited the arrival and got the touch for Gort’s goal putting them ahead.

There was little in it and Andrew Fitzgerald’s Ahascragh/Fohenagh free ensured the sides were level at half-time.  But with the elements after the break, they couldn’t push on.

Micheal Naughton’s Gort side, despite two late wides, were deadly accurate with their limited opportunities as Murphy sent over two placed balls by the 24th minute.

The occasion led to a low scoring but equally intriguing contest and when Murphy got his fifth four minutes from time, Gort looked destined for the result.

Finnerty got a late Ahascragh/Fohenagh point but was disappointed to see his effort go over, rather than under, the bar.  But Gort held on for a deserving win and the county title.