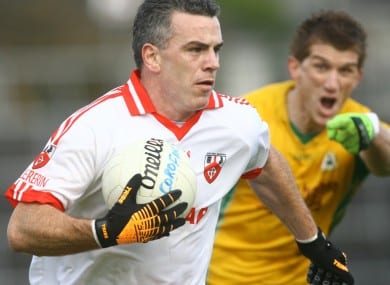 It wasn’t without talking points but Galway Daily’s ‘Galway’s Greatest Footballer’ competition finished on Friday morning (25th May) with Killererin’s Number One sweeping the poll.

PADRAIC JOYCE, the goal scorer in 1998 and contributor of 10 points in 2001, came out first in the final poll between the top four participants getting 67% of the vote as he dominated the competition.

The Tribesmen won both those years’ All-Irelands beating Kildare in 1998 and running clear against Meath three years later.  Joyce also picked up All-Star Awards along with a third in between following their loss to Kerry after a replay in 2000.

He was also Texaco Footballer of the Year and won six Connacht titles between 1998 and 2008 before calling time on his career in 2012 after 15 years.

Joyce also won four county titles with Killererin and captained the Irish international rules team to their victory over Australia in 2004.

Michael Donnellan came second with 17% of the vote ahead of Jarlath Fallon (10%) and Sean Og De Paor (6%).  But the biggest shock was Sean Purcell’s failure to make the final having come up short against De Paor in the semi-finals.

That being said, there were many who felt Joyce would be a strong candidate having not been eligible for the Centenary Team of 1984 and not long enough on the scene for 2000’s Team of the Millennium.  And after not making the ‘Top 4’ in the opening round, Joyce’s momentum never slowed afterwards.

We’d like to thank everyone who supported the contest and the results of the final are listed below.  And as an extra treat, here is the greatest Galway football team ever based on your results.

WHO DO YOU FEEL IS GALWAY'S GREATEST EVER FOOTBALLER?