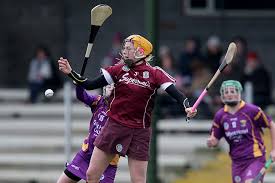 While they will start the game as favourites, this is a very dangerous tie for Galway’s senior camogie team as they look to maintain their interest in the league.

It’s effectively a quarter-final as the Slaneysiders and the Tribeswomen lock horns to decide the runners-up of Group One and who’ll meet Kilkenny on March 11th.

Kilkenny did suffer a shock defeat to Limerick last weekend meaning their Group Two top spot isn’t mathematical.  But while nobody wants to disrespect a newly promoted county, Ann Downey’s will have more serious problems if they don’t account for Meath on Sunday.

Galway beat Offaly 3-11 to 0-11 in Pearse Stadium thanks to two Niamh Hanniffy goals and an Ailish O’Reilly’s strike.  While they haven’t hit peak form yet, manager Tony O’Donovan won’t be too dismayed as they are still without their Sarsfields and Athenry contingent.

The maroon and white made the first half count against the Faithful County holding a comfortable seven-point interval lead.  And with Rebecca Hennelly tapping over superb second half frees, their win was never in doubt.

Hennelly is Galway’s top scorer with 0-14 in three games followed by Hanniffy (3-1), Aoife Donohue (1-8), O’Reilly (2-2), Caitriona Cormican (0-2) and Ann Marie Starr (0-1).  Donohue got a second half point against Offaly but it was their only one and thier lack of scoring options will be a concern.

Wexford are a different team from that which beat Galway in the 2010 and 2011 All-Ireland finals as they’ve gone through a transition phase highlighted by their failure to reach last year’s championship semi-finals.

Una Leacy is still their danger player in attack with Joanne Dillon and Linda Bolger also threatening.  The defence will be led by Shauna Sinnott, Sarah O’Connor and Ciara Storey.  And Chloe Fox will aim to orchestrate their attacks from centre forward.

The expected duel between Fox and Shauna Healy will be one of the defining battles as will Leacy verses Sarah Dervan, and Sinnott against Hanniffy.  Whoever shades these match-ups could reach the winners enclosure.

It’s only February but the loser will not see competitive action again until the second week in June.  Even though there’s a maximum of two March tests for the winners, they will be key for O’Donovan’s preparations and his Wexford counterpart Martin Carey.

Galway have held the edge over Wexford since 2014 but this is a very difficult game to call.  The Tribeswomen won’t want to lose this but the Slaneysiders can’t afford to fall as they desperately cling to the coat-tails of the country’s top teams.

Should Galway win, it will be a massive lift for O’Donovan’s team but they’ll need their best performance yet.  The same can be said for Wexford but they may have 5,000 extra supporters if the hurlers prevail over Clare.  A nervous call.