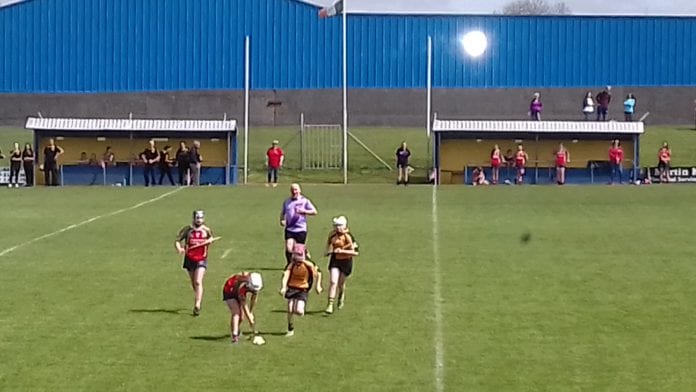 County Under 14 B1 Shield Final – Saturday, 5th May

Two early second half goals gave Killimor the County under 14 B1 Shield title in the first of a triple header in St. Brendan’s Park.

Trailing 1-1 to 0-1 at half-time, Laoise Shiel’s work rate eventually saw the ball cross the line in the opening minute of the second half to level the teams.

The Killimor centre forward was growing into the contest just before the break and had a major influence in the second 20 minutes and played her part in the second goal as well.

Those plaudits went to Molly Gohery whose free from the left caused consternation in the Ahascragh/Caltra with Shiel involved.  But it was an Ahascragh/Caltra stick that eventually connected with the second goal.

The north Galway team started brightly with Katie Delaney threatening an early strike only for Eimear Starr to close out the space.

But Ali Glynn converted a free on three minutes before making her impact 60 seconds later.  It was another placed ball and this time Glynn went low to maximum effect putting her side four points clear.

However, they didn’t add again despite their pressure they were applying as Shiel and Amy Haverty started growing influence while Starr and Sorcha Kevin were defiant in defence.

Shiel’s run resulted in a score before half-time but when herself and Goherty put Killimor in front, there was no looking back.

Glynn did reduce arrears on 28 minutes in what proved to be the game’s final score.  That being said, Ahascragh/Caltra didn’t relent chasing salvation and Glynn was unlucky to see her short rattle the crossbar with five minutes remaining.

Jane Higgins came up for an injury time strike that just went the wrong side of the posts and Killimor celebrated success.