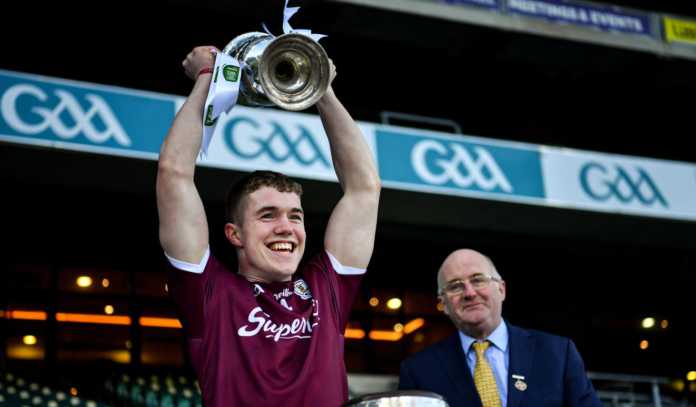 The Galway U20 Football side has been recognised for its incredible achievements, with Captain Jack Glynn and Manager Donal Ó Fátharta being named Player and Manager of the Year.

Following the end of the 2020 season, EirGrid announced the top 20 performers in the past year at the annual 20 U20 awards.

Having played a critical defensive role in keeping Dublin’s top scorers at bay in the All Ireland final, Galway captain Jack Glynn was the tournament’s standout player and has been named the 2020 EirGrid Under 20 Football Championship Player of the Year.

As the All-Ireland Champions, the Galway U20 side’s success was matched by a total of six players making the award winning panel.

Along with Glynn they are Conor Flaherty, Conor Raftery, Paul Kelly, Matthew Tierney and Tommo Culhane.

Galway Manager Donal Ó Fátharta won the EirGrid Manager of the Year award for his role in leading the Tribesmen to victories in the province and at the All-Ireland.

This was the first U20 title Galway had won since 2013, and was also Ó Fátharta’s first year in charge of the squad.

Uachtarán Chumann Lúthchleas Gael, John Horan said “I commend all of the players honoured on this list but also all of those who competed in the EirGrid GAA Football U20 All-Ireland Championship in 2020 giving the testing set of circumstances everyone involved faced.”

“As ever with this grade of football the talent on show was difficult to ignore and I have no doubt that many of the names that feature on this list will have aspirations of further county representation in years to come.”

The 20 U20 awards, in their sixth year, are run by EirGrid as the sponsor of the U20 All-Ireland Championship. This is also the second year of the Manager of the Year award.

Michael Mahon, Chief Infrastructure Officer at EirGrid, said “On behalf of all at EirGrid, I would like to extend our congratulations to the 20 players honoured on today’s prestigious list.

“The talent we witnessed in the 2020 championship was incredible and each of these young players did their counties proud during such an unprecedented time.

“We are also delighted to give special recognition to the EirGrid U20 Player of the Year, Galway’s Jack Glynn, and EirGrid Manager of the Year, Donal Ó Fátharta, who are both part of the All-Ireland winning team.