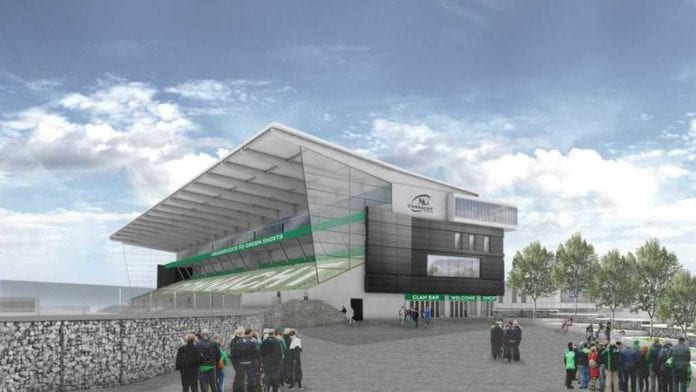 Construction work on the new North Stand and High Performance Centre at the Connacht Rugby Sportsground is due to begin next year.

Connacht Rugby have confirmed that it has begun the procurement process for Phase 2 of the massive redevelopment of the Sportsground.

This is expected to take approximately six months to complete, before construction work can get underway next year.

Once begun, it is expected that construction will take approximately two years to complete, with the new stand open in time for the 2025/26 season.

Work will begin with the build of the new High-Performance Centre consisting of a new indoor training pitch as well as state-of-the-art athlete and staff facilities.

Upon completion, work will then immediately begin on the new North Stand, with the capacity for over 7,000 supported, replacing the existing Clan Terrace.

It will consist of a mixture of standing, seated and hospitality options with top-class facilities for players, supporters, partners and media.

CEO of Connacht Rugby, Willie Ruane said, “This week’s commencement of the Public Procurement Process for Phase 2 continues the positive momentum of The Sportsground redevelopment project.”

“We have already seen the positive impact Phase 1 has had on our players’ and fans’ experience of The Sportsground and we are excited about what Phase 2 will further deliver in this regard over the coming years.”

He also thanked the government for its support for the project, “without which none of this would be possible.”

The redevelopment of The Sportsground began in May 2022 with Phase 1 consisting of a new synthetic playing surface and LED floodlighting system.

The pitch was completed on-schedule in September with the new floodlights to be installed next month.

In 2020, the government awarded €20 million towards the cost of the project under the Large Scale Sports infrastructure Fund.

Minister Catherine Martin said, “I want to congratulate everybody involved in bringing the project to this stage.”

“Your vision and commitment will ensure that Connacht Rugby has a new home that everybody concerned will be justifiably proud of.”

Minister of State for the Gaeltacht and Sport, Jack Chambers T.D. added, “This is another important step in the delivery of what will be a superb new facility in Galway.”

“My Department will continue to work closely with Connacht Rugby to ensure the passionate Connacht fans have this excellent new stadium open for business as quickly as possible”.