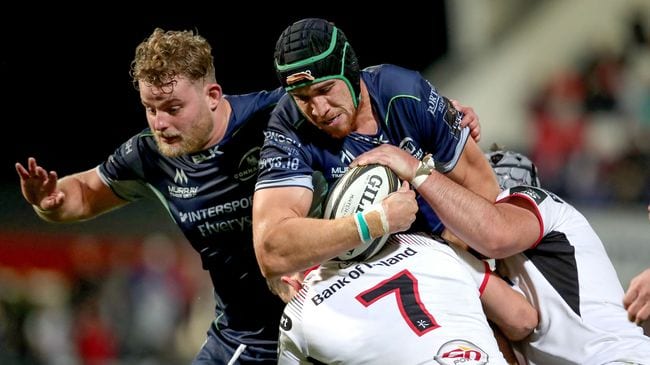 The weekend began with history on Friday night as Connacht beat Ulster in Ravenhill for the first time in 58 years as they picked up their third win from six outings in the Guinness PRO14 Championship.

Tries for Tiernan O’Halloran and Bundee Aki along with a penalty try gave the visitors a stunning win and moved them level on 15 points with Munster in Conference A.

Despite a poor display the previous weekend against Leinster, Andy Friend’s charges were quietly fancied after Ulster’s 64-7 collapse to Munster.  But the northern province welcomed back Ireland captain Rory Best and Jacob Stockdale which significantly strengthened their hand.

And a physical battle proved costly as Kieran Marmion and Tiernan O’Halloran departed by the seventh minute but not before the latter put Connacht ahead.

Matt Healy’s break set O’Halloran up to cross the line and the try was awarded after the TMO checked for an obstruction.  And a series of fouls and penalties resulted in a penalty try on 20 minutes as Connacht took a 14-5 lead at half-time.

Jacob Stockdale got Ulster’s try but the hosts were down to 13 players for the start of the second half.  Mattie Rea received a red card for upending Cian Kelleher.  And Marcell Coetzee took a yellow to miss 10 minutes.

Connacht held firm despite Ulster having two tries disallowed and when Bundee Aki went over seven minutes from time, history was in sight.  Nick Timoney got a late Ulster try to guarantee the bonus point but this was Connacht’s biggest win under their new management.

Finlay Bealham playing his way back into the Ireland squad with his early season form. Utterly dominant at scrum-time against Ulster

“When things weren’t going to script, we got on with it and fronted up for each other,” said Finlay Bealham to Brendan Fanning in the Sunday Independent.  “It was super character.

“We were down a bit to the bare bones after that and I think Colby Fainga’a was warming up to come on out on the wing because Niyi (Adeolokun) was struggling a bit. But look we dug deep and I think it’s something we can be proud of.”

Connacht begin their 2018-19 European Challenge Cup campaign against Bordeaux Begles on Saturday, 13th October.  Kick-off at the Sportsground is 3pm.