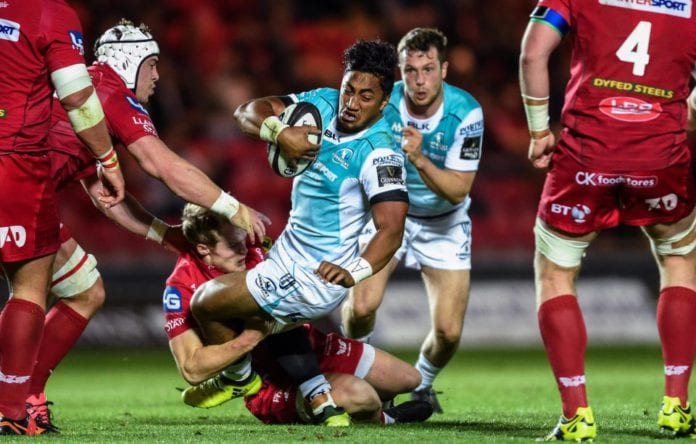 Back row Robin Copeland is set to make his Connacht debut as Andy Friend’s side take on Scarlets in the Guinness PRO14 in the Sportsground on Saturday today (Saturday).

Copeland’s inclusion is one of six changes to the Connacht side that took on Edinburgh last weekend. Irish International Bundee Aki is also included in the starting XV having come off the bench in Murrayfield to make his first appearance of the season.

Aki forms a midfield partnership with Tom Farrell who returns after recovering from a stomach bug that ruled him out last weekend.

Winger Cian Kelleher is named on the wing and is part of a back three that includes Matt Healy on the opposite wing and Tiernan O’Halloran at full back.

Prop Denis Buckley is back in at loosehead to make his third start of the season while Gavin Thornbury is named alongside Quinn Roux in the second row.

Copeland’s inclusion at number 8 sees him named in a back row that also features team captain Jarrad Butler at openside and blindside Sean O’Brien.

“We have been really impressed with Robin in the pre-season both on and off the field,” said Head Coach Andy Friend to Connacht Rugby’s official website.  “His energy and maturity have been a big addition to the wider group.

Here is your Connacht team to face @scarlets_rugby at The Sportsground tomorrow!

“He played 40 minutes for the Eagles side last weekend and he came through that ok after a niggly injury, so he is good to go for Scarlets”.

“Scarlets are a quality side and we expect a huge challenge from them. They are one of the top teams in this competition, so it is a massive game for us. We have a really healthy competition in our squad at the moment and that is exactly what we need as the big games keep coming”.

Connacht face Scarlets in the 2018-19 Guinness PRO14 Championship on Saturday, 22nd September.  Kick-off at the Sportsground at 5.15pm.