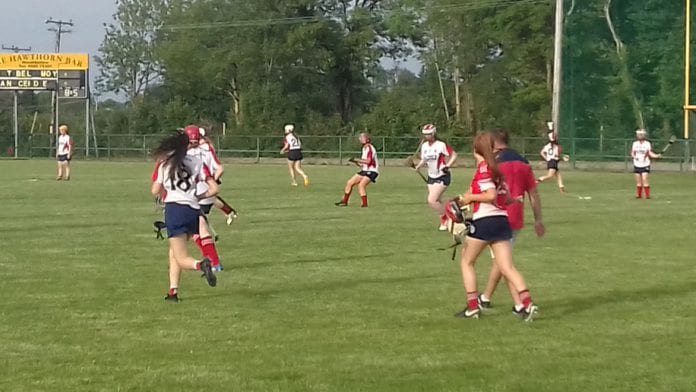 The 2018 Intermediate Championship is going to be no less competitive than any other year after Carnmore beat last year’s finalists Mountbellew/Moylough on their own turf.

Three Heffernan goals (two for Niamh, one for Michelle) gave the former finalists a massive result and made them favourites to take one of the two semi-final places in Group Two.

Carnmore would have been considered contenders but Mountbellew/Moylough started as favourites after testing Athenry in the 2017 decider.  But following the hosts taking a 0-4 to 0-2 lead, the visitors turned the game to lead by seven at half-time.

Crowe kept Carnmore in touch despite Katie Mannion getting a third Mountbellew/Moylough free.  But a Niamh Heffernan effort saved by Nadine Connolly on nine minutes showed the threat Carnmore carried.

And in the second quarter, they made it count hitting 1-4 unanswered to go 1-6 to 0-4 clear.  Anna Finnegan applied pressure that allowed Michelle Heffernan find the net before Carnmore added points through Crowe (2), Aishling Kelly and Michelle Heffernan.

It was a pivotal moment as Tess Daly nearly set up Ciara Fox for Mountbellew/Moylough before the Carnmore goal.  And even though Katie Mannion (2) and Daly did trouble the umpires, points for Niamh Fox and Crowe came either side of an excellent Niamh Heffernan strike for Carnmore’s second goal.

That left it 2-8 to 0-7 at half-time but Mountbellew/Moylough were never going to throw in the towel and rallied back during the second 30 minutes, twice getting within one point.

Katie Mannion started the comeback hitting four scores in as many minutes to leave a goal between them before Niamh Heffernan and Crowe responded to make it 2-10 to 0-11 in Carnmore’s favour on 38 minutes.

Mountbellew/Moylough needed a goal and it finally arrived on the three-quarter mark when Orla Whyte finished to the net.  And after Sinead Healy split the posts two minutes later, they trailed by just 2-10 to 1-12.

Crowe and Katie Mannion traded frees as the home support got behind their charges but Carnmore were dangerous on the counter attack.  Niamh Heffernan did have a penalty saved two minutes from time but she was eventually rewarded with her second goal in added time.

Carnmore are in a strong position and victory over Kiltormer should book a semi-final spot.  For Mountbellew/Moylough, they face a confident Ahascragh/Caltra team on Wednesday (11th July) in Duggan Park knowing they must leave with a result.