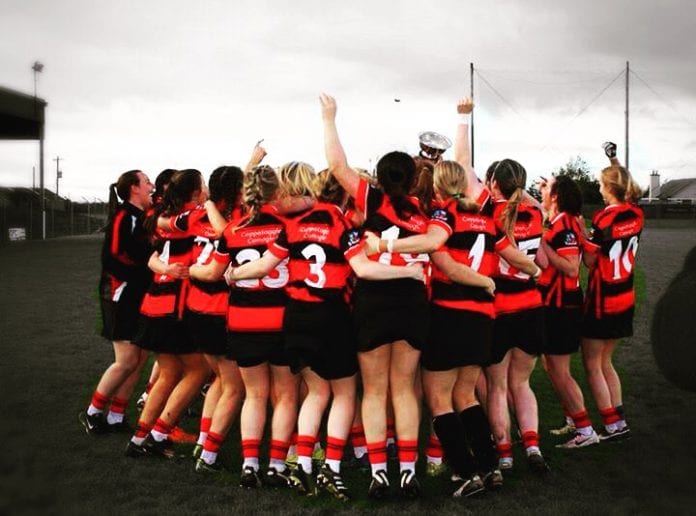 Cappataggle got their senior championship campaign back on track with their first 2018 win.  With Senior B only carrying two qualification slots, Derek Frehill’s team couldn’t afford a second reversal after an earlier loss to Killimor and ensured they picked up the three points thanks to two Michelle Skehill goals and majors for Ciara Lenihan and Becky Gilchreest.

Cappataggle, with Caitriona Cormican back in the starting line-up, struck early but found it hard to shake off a determined Davitts outfit who had goals from Aine Dervan, Emma Rourke and Laura Hanbury.

Skehill and Cormican tallied in the first two minutes but when Antionette Cormican set up Skehill for the first goal on seven minutes, Cappataggle were 1-2 to 0-0 clear.

Davitts, who began with a four-point win over Pearses, finally got off the mark through Taragh Moloney  before an Aine Dervan free on nine minutes reduced arrears to three.

Cormican and Skehill replied for Cappataggle before Dervan and Laura Hanbury combined only to see a Davitts shot run across goal.  Moloney’s second score on 20 minutes left it 1-4 to 0-3.

Laura Creaven pointed for Cappataggle before Caitriona Cormican was denied by a Tara Murphy save on 25 minutes.  It could have been critical as two minutes later, Moloney set up Hanbury for Davitts’ first major and they trailed by just 1-5 to 1-3.

However, with Skehill pulling the strings, Cappataggle restored their gap as she put Gilchreest through for the second goal on 29 minutes.  And when Gilchreest and Claire Blake traded white flags in injury time, Cappataggle led 2-6 to 1-4 at half-time.

The third quarter saw a complete blackout in scoring as the night sky descended over Ballinasloe and the floodlights were required for the final 15 minutes.

Lorraine Farrell’s free broke the deadlock on 43 minutes but when Moloney played the pass three minutes later, Dervan got Davitts’ second major and they trailed by just one point.

However, lapses of concentration after each goal ultimately cost Davitts.  From the next attack, Skehill struck her second Cappataggle major after Antionette Cormican’s run forced another Murphy stop.

The game wasn’t over as Rourke got in for Davitts third goal on 51 minutes leaving it 3-6 to 3-5 in Capptaggle’s favour.  But the south Galway side wouldn’t score again.  Caitriona Cormican, Lenihan and Aishling Donnellan added for Cappataggle with Lenihan getting the fourth green flag in injury time.