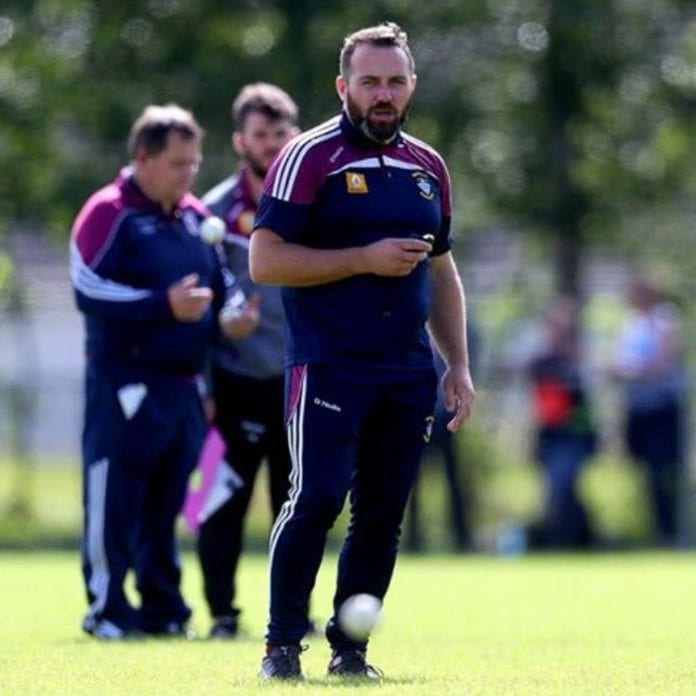 Westmeath camogie manager Johnny Greville admitted to be disappointed after his team’s second defeat in the All-Ireland intermediate championship saw them exit with one group game remaining.

A Tara Ruttledge goal after four minutes allowed Galway a platform to lead throughout and despite the best efforts of, particularly, Pamela Greville, the Midlanders came out the wrong side of a 1-15 to 0-17 score line.

“Bitterly disappointed is top of the list,” said Johnny Greville to Dermot Flaherty after the final whistle.  “Scores in the first half cost us – the goal especially.

“I thought the girls performed really well in the second half.  We needed a goal to win it.  Today, was a must win game!  Well, every game is a must win game for every team.

The Westmeath hurling team which won the 1984 All-Ireland B Championship after a 4-10 to 1-16 win over London.
This meant our hurlers qualified for the All-Ireland Quarter-Final where they were defeated by Galway.
The mascot is current Westmeath camogie manager Johnny Greville. pic.twitter.com/RCDSuMFhW3

The 2017 Premier Junior champions can be proud of their year in the second tier having reached a league final and proved they can match the elite at this grade.  And the Westmeath manager noted the intensit of the game which his squad are still getting used to.

“There was huge intensity,” concluded Johnny Greville.  “It was a physical game.  We played Cork several times this year.  We beat them in the group stages (league) and we played them in the Division Two final as well.  This is the first time we’ve met a physical opponent (the same) as Cork.”

Westmeath will meet Antrim in their final game of the 2018 Liberty Insurance All-Ireland Intermediate camogie championship on Saturday, 4th August.  It will be a home tie for Westmeath with time and venue still to be confirmed.