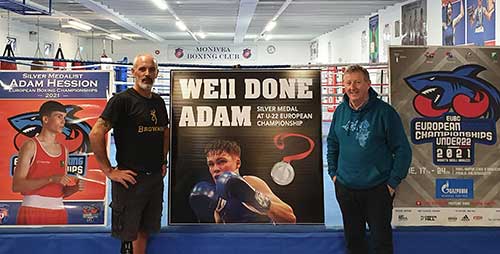 Galway TD Seán Canney has congratulated the Monivea Boxing Club on its recent international success, with of two of the club’s members winning European medals.

Lea Butler won a European Bronze medal and Adam Hession won a European U22 silver medal, which  Deputy Canney says is a major success for this long-established club situated in the East Galway village.

“Last week the Club was successful in their application to the Capital Sports Grants for funding of training equipment. The club received €6,638,” said Deputy Canney.

He said that clubs like Monivea can be the catalyst for more medals at European, World and Olympic level.

“We as a nation can provide more success from these rural clubs,” added Deputy Canney.

“I salute Monivea and the team involved, including Gerry (Gus) Farrell and Cllr. Gabe Cronnelly who continue to work tirelessly for the Club.”