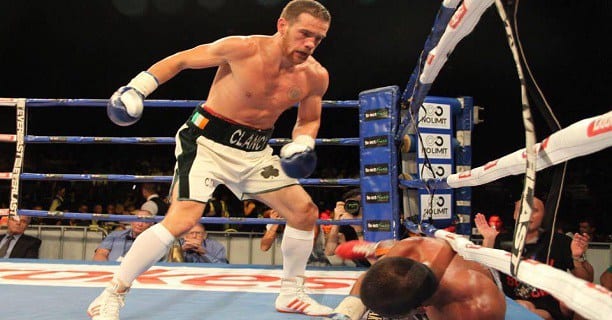 On a boxing card named ‘The Fighting Irish’, Sydney based Clancy has moved up from lightweight in an attempt to grab the same version of that belt he won in 2015.

The 33-year-old will hope for an improvement in fortunes having won three and lost three of his previous six fights but Clancy is confident he can kick off the weekend on a winning note in The Star Event Centre in Sydney.

“It’s all going to plan,” said Clancy to T2T Boxing.  “There’s a good atmosphere around the place, we’re all pushing each other on, there’s a good vibe in the gym.”

“Fighting in the Casino on Paddy’s Day, you can’t beat it. It’s about getting off to a good start.”

“I want to get a bit of rhythm going and be more hot than cold, that’s the plan.”

Clancy’s bout with Williams will be the sixth of a 10-fight card that’s headlined by Dublin’s Darragh Foley looking to earn a WBA world title shot in the same division.

He’ll take on Canada’s Steven Wilcox in the main event in a WBA regional unification bout but with both top 10 ranked, the winner can expect a top-level fight later in the year.

They’re two of many Irish fighters in action on St. Patrick’s Weekend with Michael Conlon’s featherweight encounter with Hungarian David Berna the pick of the bunch.

Clancy was meant to have an Irish title fight with Belfast’s Paul Hyland in 2016 before that fell through.  But he has enjoyed his time in Australia and will hope to get back to winning ways.

Gearoid Clancy will face Sam Williams in an eight-round light welterweight contest for the New South Wales title at The Star Event Centre.  The contest will take place on St. Patrick’s Day with both fighters expected in the ring at approximately 7am Irish time.