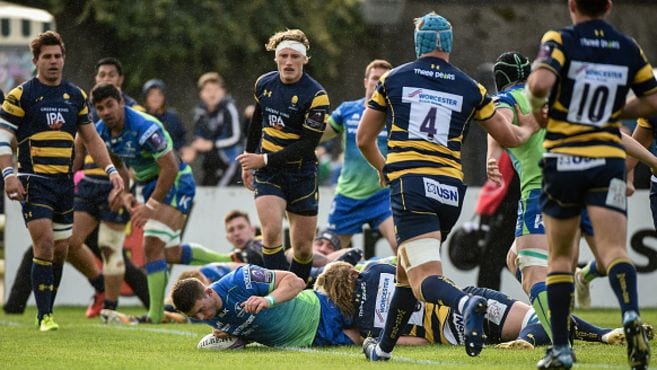 Connacht’s hopes of a home European Challenge Cup quarter-final could be secured Saturday (13th January, 3pm Sixways Stadium) when they face Worcester Warriors in a repeat of their 15-8 win in the Sportsground in October.

Eoghan Masterson’s captained Connacht and struck an early try with Matt Healy also getting over the line in a tight battle that set Kieran Keane’s men up for an assault on the continent as they remain unbeaten.

With four wins and 19 points, victory will have the Westerners guaranteed Pool Five winners and will also secure a home quarter-final in April.  And even though they suffered a disappointing 39-13 drubbing to Munster seven days earlier, confidence is high after a good showing over the festive period.

“The excitement in the group around the three inter-pros was massive,” said forward coach Jimmy Duffy to Connacht Rugby’s official website. “As a coach you just try to keep a lid on it and then open the doors and let the players away. They don’t need to be motivated in that period of time. The same applies to Europe for us now.”

The squad looked in a low ebb following a Guinness PRO14 loss to Zebre at the beginning of December but came back with two European wins against Brive, a bonus point victory over Ulster and were just short on New Year’s Day going down 21-18 to Leinster.

Having to rest Irish internationals Bundee Aki, Kieran Marmion and Ultan Dillane made their trip to Thomond Park difficult and the winners, welcoming back Conor Murray and CJ Stander, ran in five tries.

“We were disappointed after the weekend but there was a lot of energy around the dressing room,” added Duffy. “We got the review out of the way and corrected what we felt needed correcting, and then got our direction for this week. We believe we’re in a good space and we’re looking forward to it.”

🎥 “It’s an opportunity to progress in this competition.”

Carl Hogg talks about fielding a strong side for Saturday’s clash with Connacht at Sixways… pic.twitter.com/lmUGC5ByfW

Worcester Warriors are also wounded following a 41-25 defeat to Bath in the Aviva Premiership.  But Europe can give them an outlet as they currently occupy one of the three best placed runners-up positions and a victory over Connacht could cement a first qualification for the first time since 2009.

Full back Chris Pennell, scrum half Francis Hougaard, centre Ryan Mills and Scottish back row Dave Denton are key threats though Hougaard took a knock against Bath and will be monitored.  England’s Ben Te’o is ruled out with an ankle injury.

Connacht also have an injury concern with James Cannon picking up a shoulder injury against Munster but they could welcome back James Connolly and Cian Kelleher who are both back training after being sidelined.

“At the end of the day you want to get results,” stated Connacht loose forward Jarrad Butler who returned from a knee injury to play a full part in the festive program.  “And it was frustrating against Leinster when we had the opportunities and didn’t quite get there.

“Then against Munster, we knocked off for a little bit and put ourselves in a really tough position. As a group we want to be able to lift it that little bit more and start getting those results and obviously we’re hoping to do that this week.”

Both Keane and Worcester coach Carl Hogg are expected to name full strength squads as they seek momentum before their final round fixtures against French opposition the following week.