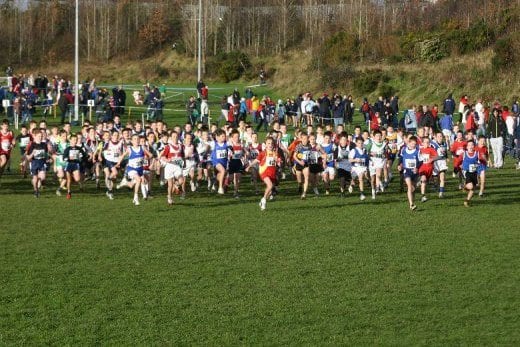 The second day of action for uneven ages in the 2018 championships were held on Sunday (21st October) with over 300 athletes competing between the under 9 and under 19 grades in Bushfield, Loughrea.

Craughwell were the big winners taking 11 titles ahead of Galway City Harriers who picked up four wins.  Athenry and Tuam got three victories each, South Galway prevailed twice with one title going to East Galway.

The first team event went Craughwell AC’s way as they won the under 9 girls event.  And they added three more in the under 11, 17 and 19 boys category.

Alan Hallinan became their first individual gold medal winner when he won the boys under 9 competition.

They went on to have six more first places in Declan O’Connell (under 11 boys), Mathys Bocquet (under 13 boys), Ross McGuinness (under 15 boys), Ailbhe Miskella (under 17 girls), Sean Cotter (under 17 boys) and Patrick Noonan (under 19 boys).

In the under 11 girls individual event, Aisling Geaney from South Galway stormed home to take gold in an impressive performance.  And South Galway also had success in the under 13 girls team event.

Mia Craughwell delivered gold for Galway City Harriers (GCH) when she sprinted home to victory in the girls under 13 race after a great battle with Aoibheann Fitzpatrick of Ballinasloe and District AC.  And GCH also won the under 15 girls through Emma Moore with both the boys and girls under 15 team competitions also won by the club.

East Galway’s title came in the under 13 boys event though Oisin Keane wasn’t far away in the under 15 boys losing out after a great tussle with Craughwell’s McGuinness.

Aine O’Farrell of Athenry won the U19 Girls race and the club took the team prize.  Athenry also won the under 17 girls team competition.