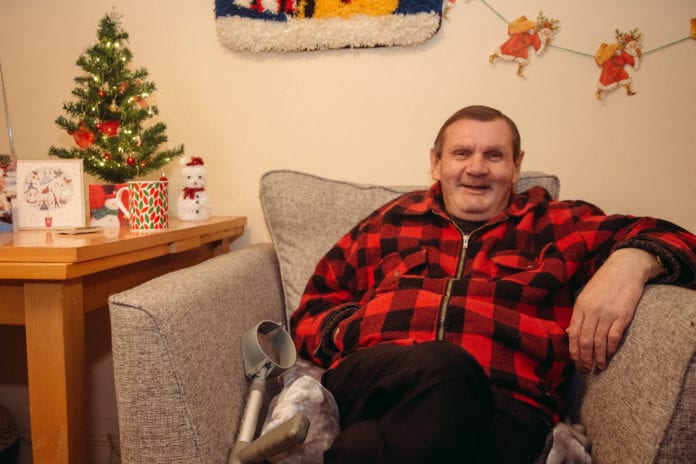 A well-known Galway man has spoken out about his battle with homelessness to shine a light on the realities of sleeping rough and to raise funds for Galway Simon Community.

Denis Connolly, who was born in Shantalla in 1953, is Galway Simon Community’s ambassador for its Christmas Campaign this year and features in its Christmas video.

Denis had a very difficult childhood; after his mother died, he was put into St. Joseph’s Industrial School in Lower Salthill where life was very difficult.

When he left St Joseph’s in his late teens, he had nowhere to go and he turned to drink to cope with the loneliness.

Speaking about what it was like to be homeless, Dennis explained how he and other homeless people were treated when he was sleeping rough.

“I was homeless living on the streets of Galway for years. I used to sleep in an old shed at the back of the old Claddagh Palace in Salthill.

“Back then people ignored you if you were homeless, you were kept down, you had nothing at all. I never had any possessions, only what I wore.

“If the shoes went, sometimes I would put cardboard in them. Christmas was the loneliest part of the year. You had nothing.

“You had no Christmas dinner. You never mix with anyone when you’re homeless. You’re a lonely person,” Dennis said.

During his time on the streets, Dennis became a well-known character in Galway. In 1979, he first came into contact with Galway Simon Community when some of the charity’s original volunteers visited him on their soup run.

“They were my only friends at that time. I’ll never forget how it felt to be treated like a human being, like I was worth something. At the beginning they used to come three nights a week to talk to us and bring us soup and sandwiches. Only for them I would be dead a long time ago,” Dennis said.

After years of sleeping rough and being in and out of emergency accommodation, Dennis turned his life around. He moved into one of Galway Simon’s high support houses and he started going to AA.

Through his own hard work and with the help of his key workers, he was eventually able to leave homelessness behind him for good in 2015 when he moved into a place of his own.

“When I was ready to move on from high support and when a small council flat became available, Galway Simon helped me move and settle in. I’m in my own little paradise now”, Dennis explained.

This Christmas, Dennis is using his voice to help others like himself who weren’t as fortunate to get help, and for those still out there who urgently need support. He says there are no hopeless cases.

“Look at me years ago, I changed my life and I don’t drink today. I’m years off the drink and I did it for myself. I can’t stop thinking about the people, including friends of mine, who weren’t as lucky as me. Galway Simon didn’t give up on me. Please give them your support this Christmas.”

If you would like to support Galway Simon Community this Christmas and help to close the door on homelessness for others like Dennis, visit www.galwaysimon.ie to make a donation