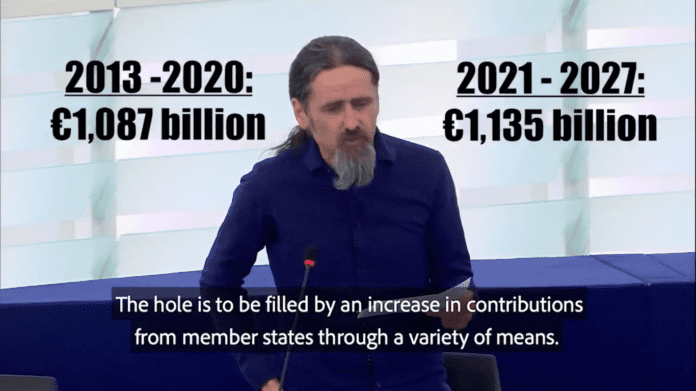 Midlands North West MEP Luke ‘Ming’ Flanagan has hit out at the European Union and President of the European Commission Jean-Claude Juncker in a speech in the European Parliament.

Flanagan criticised the militarisation of the EU and funding cuts to the agriculture sector from 2021 to 2027.

He said that the EU’s priority is clear: “fighting before feeding.”

“After all these years of peace,” he said, “we are to become a war machine.”

PESCO was activated by 25 states EU states including Ireland in December 2017.

The aim of PESCO is to deepen defence cooperation between EU Member States who are capable and willing to do so and to  develop defence capabilities and make them available for EU military operations.

However the Left-wing GUE/NGL EU Parliament group, which includes Flanagan, Sinn Féin and the Greek ruling party Syriza, is critical of this part of the EU’s security and defence policy .

Watch an excerpt from Luke ‘Ming’ Flanagan’s speech below.

Fighting or Feeding? Juncker and Co have already decided the future direction of the European Union. Money for feeding Europe’s population is to be cut. Money for the military is to increase. Do you agree with this? pic.twitter.com/dJ2gAZzErM

The National Lottery is urging lotto players in Knocknacarra to check their tickets from before Christmas as a €46,234 prize sits unclaimed.On Sunday, December...
Read more
NEWS

An Bord Pleanála green lights plans for 121 homes at Barna

An Bord Pleanála has granted planning approval for the constructions of 121 homes on the outskirts of Barna.Buekeway Homes submitted a Strategic Housing Development...
Read more
NEWS