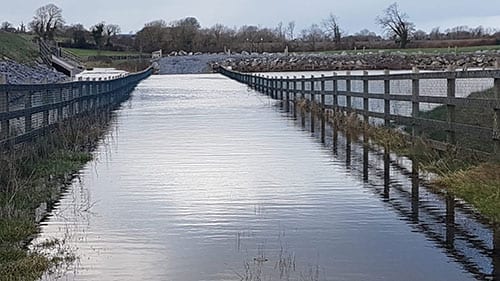 Galway could see even more flooding over the next few says as Met Eireann has issued a Weather Advisory for fifteen counties.

Up to 50mm of rainfall could accumulate between Saturday and Tuesday Met Eireann has warned, creating a risk of further flooding as river levels remain elevated.

The Weather Advisory has been issued for all of Connacht, as well as counties Longford, Offaly, Westmeath, Cavan, Donegal, Clare, Cork, Kerry, Limerick and Tipperary.

The heaviest periods of rain are expected today, as well as early on Monday and Tuesday.

Galway has been dealing with heavy rain today after a glimpse of some Spring sunshine in the past few days.

This rain is expected to continue tonight, but lighten to scattered showers heading into Sunday morning.

A Status Yellow marine warning has also been issued by Met Eireann, with south to southwest winds reaching gale force on all Irish Coastal Waters and on the Irish Sea today.

Sunday will see further scattered showers, heaviest in the early hours of the morning, but patches of sunshine will also creep through in the afternoon.