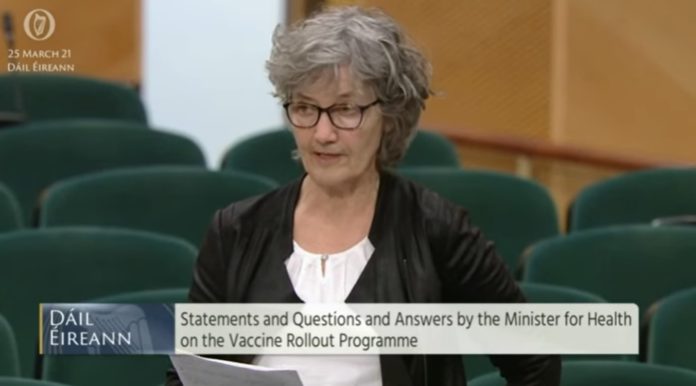 Galway West TD Catherine Connolly has said that the rollout of the COVID-19 vaccination programme in Connemara has been “totally inconsistent”.

Speaking in the Dáil this week, Catherine Connolly said to the Health Minister that there is an incredible disparity between how many vaccine doses different GPs are receiving.

“I know of a case in the middle of February, where three out of four GP practices in an area three received a supply of vaccines and one got nothing,” Catherine Connolly said.

“The GP in question spoke on the radio and was very vocal about the issue and has got any number of Pfizer vaccines since. He said this himself. He has now moved on to administering the vaccine to over 70 year olds.”

Deputy Connolly linked issues with the vaccination roll out to the state of the HSE and health system prior to the COVID-19 pandemic, saying she was “not sure that we could expect any better” as the healthcare system was already a “mess” beforehand.

Health Minister Stephen Donnelly had said that vaccination was Ireland’s “biggest weapon” against COVID-19, with more than 700,000 doses now administered.

The Minister said that the government expects to have received delivery of more than one million doses of three different vaccines by the end of this month.

“As always, this is dependent on the pharmaceutical companies delivering to the agreed amounts. If they do, then four in every five adults can be offered either one or two vaccine doses by the end of June.”

The vaccination programme in Ireland has been hampered by multiple setbacks in the form of deliveries which are either delayed, or smaller than expected, particularly of the AstraZenica vaccine, which has fallen far behind its contractual commitment to the EU.