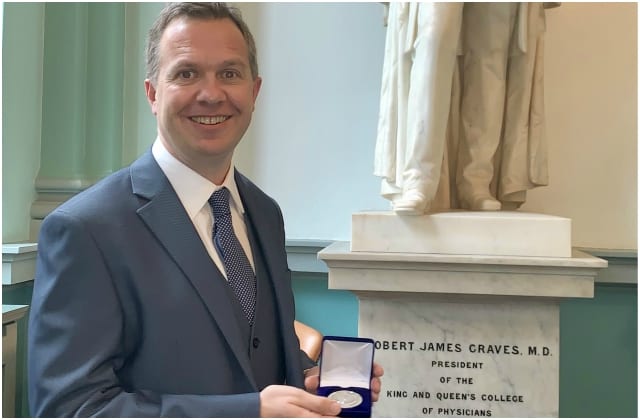 Professor Derek O’Keefe, consultant endocrinologist at Galway University Hospitals, has won the inaugural St. Luke’s Medal for his work on the future of medicine.

Prof O’Keeffe was chosen for the award because of his prior Telemedicine work with NASA as a consultant and the recent successful Diabetes Drone mission, which delivered insulin by unmanned aerial vehicle to the Aran Islands and returned with a patient’s blood sample.

He has also done significant public outreach activities around his clinical-academic work including a TEDx Talk ‘Digital Doctors: The Future of Medicine’ and an RTÉ documentary ‘Bittersweet – The Rise of Diabetes’, which documents the lives of patients with diabetes and how technology is improving care.

As well as his work with GUH, Prof O’Keefe is also a Professor of Medical Device Technology at NUI Galway.

He was granted this award by the Royal College of Physicians of Ireland at the annual St. Luke’s Symposium recently.

As part of the St. Luke’s award, Prof O’Keeffe delivered a lecture titled ‘The Future of Medicine is the Patient’ which focused on the following themes: