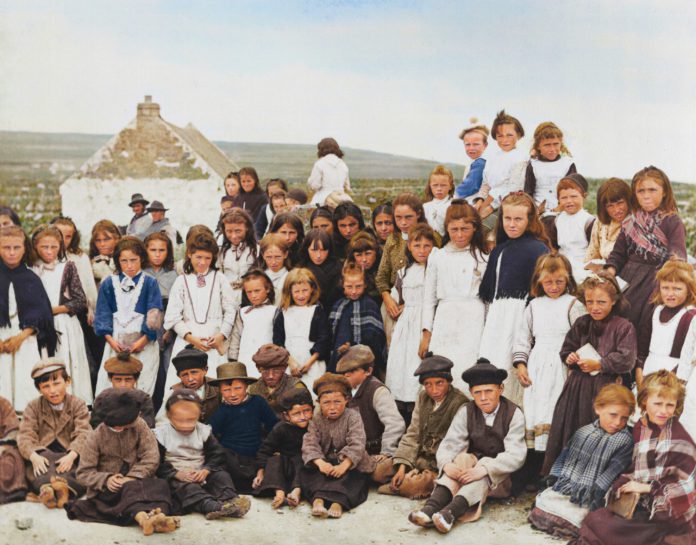 Two exhibitions with very strong connections to the three Aran Islands are set to open at Áras Éanna Ionad Ealaíne, the arts centre on Inis Oírr, this weekend.

On Friday evening, one of Ireland’s most famous expressionist artists, Mick Mulcahy, will unveil a retrospective of his work – and new paintings from a recent residency on Inis Oírr – in the Áras Éanna art gallery.

The following day (Saturday, July 9) sees the launch of ‘Old Aran in Colour’ in the courtyard outside the arts centre with a special afternoon event which will include a musical performance by Inis Oírr-based composer MacDara Ó Conaola.

Based on the success of the books ‘Old Ireland in Colour’, NUI Galway academics and co-authors John Breslin and Sarah-Anne Buckley are bringing 20 colourised old photos from the three Aran Islands to an outdoor setting on the smallest of the three islands until the end of September.

Mulcahy was the first artist ever to hold an exhibition in the building which now hosts the most westerly arts centre in Europe.

After spending a winter on Inis Oírr in the late 1980s, he was inspired to showcase his work in the disused weaving factory which now houses Áras Éanna.

Mulcahy’s latest exhibition, entitled Nowhere to Hide at Sea, runs until July 31. He is also celebrating his 70th birthday this year.

“Maybe without Mick Mulcahy, there would be no arts centre here on Inis Oírr,” says Dara McGee, Artistic Director of Áras Éanna.

“Over 25 years ago, Mick rented out this building, which was a disused weaving factory, and used it as a studio. Out of that came the idea to locate an arts centre here. Mick wandered back to Inis Oírr again last summer, coinciding with our 21st birthday.

“We struck up a great bond between the arts centre and Mick which resulted in Mick spending a month here on a residency in February of this year, preparing work for this exhibition and for a retrospective that is on in Dublin later next month.

“We are delighted to have Mick here. He is such a flamboyant, colourful character and that comes out in his art works.”

On Saturday afternoon, the launch of the ‘Old Aran in Colour’ exhibition will include a talk by Breslin and Buckley, with accompanying music by local composer Ó Conaola for the occasion. The exhibition is co-funded by the Árainn Fund at NUI Galway and Áras Éanna Ionad Ealaine.

“This has come about from a partnership we launched last year with the University in Galway. We are hopefully going to see lots of projects between the university and Áras Éanna,” says McGee.

“It’s fantastic for us, as a small little arts centre on a small island, that we have this partnership with NUI Galway. This is our first partnership project with the University bar the Curacha exhibition which we staged in the University last year, which was a fantastic success.”

The Michael Mulcahy exhibition opens at Áras Éanna, Inis Oírr, on Friday, July 8, at 8pm and runs until Sunday, July 31.

The Old Aran in Colour exhibition opens in the courtyard outside Áras Éanna on Saturday, July 9, and runs until Friday, September 30.