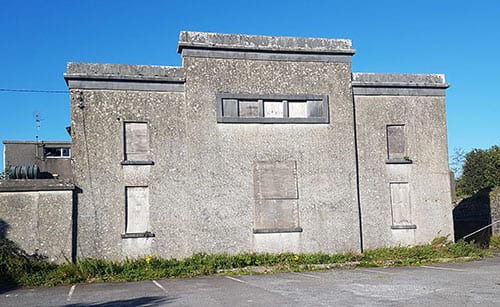 The Courts Service have identified the provision of a new courthouse in Tuam as one of their regional priorities to make up for deficient facilities.

The Courts Service Annual Report for 2019 lists Tuam as one of the locations where it is planned to provide “new or refurbished courthouses in regional cities and county towns where facilities remain substandard”.

Tuam courthouse has been closed for over a decade, with courts taking place in various temporary locations including The Town Hall, The Old Grove building and now on the Weir Road.

Galway East TD Seán Canney said that providing a permanent courthouse is “vital” to Tuam, and suggested that redeveloping the old courthouse would bring an “iconic building” back into use.

Announcements were made in recent years that the Office of Public Works was planning on refurbishing the old building.

However last year it was confirmed that this would not be going ahead due to the condition of the building, which was described as not fit for use.

The Courts Service report notes that the provision of a courthouse in Tuam is part of the Government’s National Development Plan 2018 – 2027, and that the “precise allocation and timing” of funding has yet to be determined.

Where exactly Tuam falls in the list of priorities will be determined based on further planning and costs analysis.

The Courts Service is also the owner of the site adjacent to the old courthouse, which has been suggested as a potential site for a new building.

“I am confident that the Courts Service will progress the development of this site and I acknowledge the support of former Justice Minister Charlie Flanagan in my efforts to include Tuam in the list of priorities,” Seán Canney said.

“I will be contacting the Office of Public Works and the Courts Service to push for this project to be expedited”.