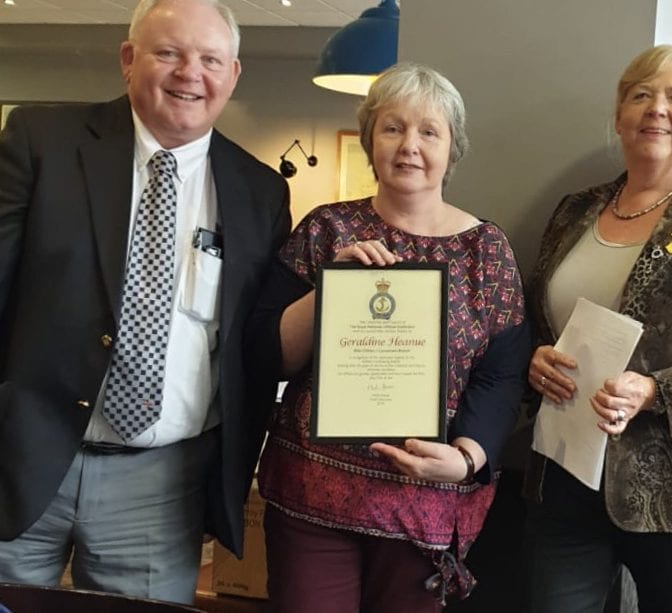 Members of the Connemara/Clifden RNLI Lifeboats Fundraising Branch gathered at the Station House Hotel in Clifden recently to honour long standing members on their retirement for all they contributed to this lifesaving service.

Geraldine Heanue of Letterfrack received an award in recognition of her retirement after more than 20 years service as a fundraising officer.

Stuart Freeman of Ballynahinch is retiring after more than 40 years volunteering as an RNLI box collector and fundraiser. He was given an award for his long service.

A posthumous award was presented to Ann and Catherine Coyne in recognition of Owen Coyne of Clifden’s longstanding support of the lifeboats during Flag Day and Church Gate collections.

Margaret Wallace was also recognised for her volunteering for collections and retirement from the fundraising team.

Bernie Davis received an award for excellence in volunteering for her long running annual participation in the Dublin Women’s mini marathon in support of Clifden RNLI.

Although unable to attend on the day, Michael Mullen also received an Award for Excellence in fundraising for his annual darts competition in memory of his son Mikey Mullen, who was tragically lost at sea.

Speaking at the gathering, Ann Marie Bennett thanked everyone in attendance for their consistent and long standing support of the lifeboats in Connemara.

“The Clifden RNLI has grown and developed hugely over the years and the generosity and dedication of all our fundraising volunteers is what helps this to happen,” she said,

“Without the time and energy of our fundraising volunteers, the crew would simply not be able to carry out the lifesaving work that they do, and we are all extremely grateful for everything you have done in support of the lifeboats.”

“Your generosity and time has saved lives and helped families and our community in so many different ways over the years”.