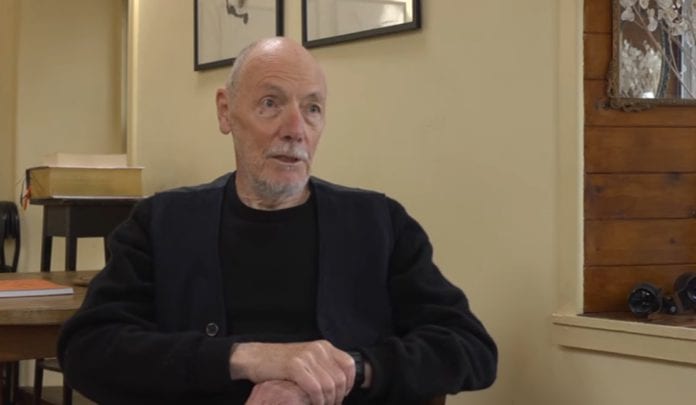 Tributes have been paid from many corners in the last 24 hours, including by the President, for acclaimed Connemara based writer and cartographer Tim Robinson who died from coronavirus.

Robinson lost his life to the coronavirus at age 85 in St Pancras Hospital London, not far from his flat in the city.

He was best known for his non-fiction works exploring the history and heritage of Connemara and the Aran Islands.

His trilogy on Connemara: Listening to the Wind (2006), The Last Pool of Darkness (2008) and A Little Gaelic Kingdom (2011), was extremely well received after spending decades in the area.

Robinson first moved to the Aran Islands in 1972, and spent decades thereafter mapping local heritage features throughout the region and gathering oral history on their provenance.

He was born in England in 1935, studied at Cambridge, and worked as a visual artist before picking up sticks for the west of Ireland.

The Townlands Index for Connemara and the Aran Islands he gathered over many years have been digitised at NUIG, and are in the process of being mapped for easy browsing.

These contain not only detailed descriptions of the local landscape, including historical, ecclesiastical, geological, and archaeological features, but also showcase a great deal of local lore.

Robinson was elected to the Royal Irish Academy in 2010.

President Michael D Higgins paid tribute to the way in which Robinson’s work drew attention to the “incalculable value” of the natural world.

His deep affection and understanding and affection for the landscape and heritage of Connemara and the islands is what enabled him to bring them to life in his work so clearly the President added.

“It was with great sadness that I learned of the death of Tim Robinson, writer, illustrator, artist, mathematician cartographer and member of Aosdána.”

“For his family and for his wide circle of friends the news, so soon after the death of his wife Mairéad, is particularly painful.”

“Having long been an admirer of Tim’s work, from the magnificent Folding Landscapes maps to his stunning trilogy on Connemara and his Stones of Aran volumes, I had the privilege of discussing his work with him on a number of occasions and developed a deep respect for the man behind these masterful works.”

“He will be remembered for his deep understanding of and affection for the landscape, heritage and people of Connemara, the Burren and the Aran Islands, which allowed him to reveal, in such an engaging way, so much of that which had escaped the less trained, less thoughtful and less sympathetic eye.”

“Tim Robinson was a scholar who shared his profound understanding of his surroundings, and sought to draw attention to the incalculable value of the natural world and the threats that exist to our linguistic, cultural and physical heritage.”

“As a valued member of Aosdána and the Royal Irish Academy, Tim comfortably combined his scientific and artistic talents to enchanting effect in his wonderful publications.”

“He was a scholar with unique and inter-disciplinary talents and an incomparable sense of wonder.”

“Tim and Mairéad have left a magnificent and enduring legacy. Sabina and I offer the members of their extended family and their friends our deepest condolences.”