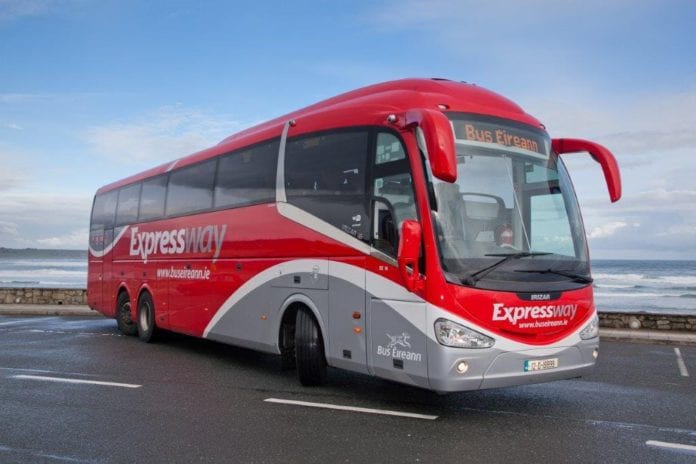 Multiple Bus Eireann intercity Expressway routes serving Galway are being cancelled as the public transport operator is focusing on its city services.

Expressway intercity bus routes from Galway to Limerick and Dublin, among others around the count are being shut down due to challenges posed by COVID-19.

The full list of Expressway services closing includes those between Dublin and Cork, Dublin and Galway, and Dublin and Limerick, and the Dublin / Belfast service is to be suspended indefinitely.

No date has yet been set for the cancellation of these services, but it has been indicated that this will not result in jobs being cut.

The current Commercial Bus Operator emergency supports to the Cork, Limerick and Galway routes expire early next year, and the transport operator has said that changes are likely at that time.

Bus Eireann said that it has done this to “safeguard” the remaining 14 Expressway routes, and to meet the increased demand for city and commuter services.

The decision to cancel these intercity routes was taken following a Bus Eireann board meeting on Monday.

The X51 service from Galway to Limerick and the X1 service Dublin to Belfast have not been in receipt of emergency funding and services will formally cease on these routes over the next few months.

“We have an opportunity through the July stimulus measures for public transport to increase our Bus Éireann city services in Cork, Galway and Limerick, as well other services as in Louth and Meath under contract to the NTA,” said Chief Executive Officer, Stephen Kent.

This will require over 100 drivers he said, which will be achieved by “consolidating out Expressway network” and ceasing some of their less profitable routes.

Michael Malone - July 2, 2022 0
Met Éireann has issued a status yellow warning for blight for five counties in the West. The forecasters say that on Tuesday and a for...